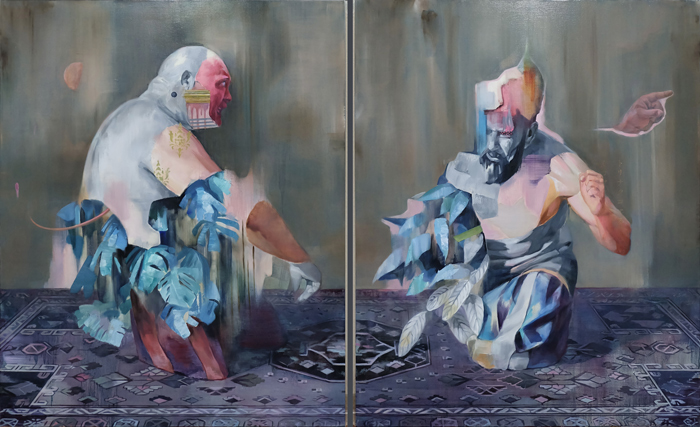 Japanese artist Akihiko Sugiura’s solo show, “Kyorai (去来): Coming and Going” stems from the collaboration between Arte Laguna Prize and Jonathan Ferrara Gallery, which selected Akihiko Sugiura as a finalist in the 13th edition of the Arte Laguna Prize 18.19. Sugiura presents seven new paintings and two sculptures. The title of the show, Kyorai, roughly translates to “coming and going”, “recurrence” or somewhere between past and future. Typically, this Japanese saying is used for the “coming and going” of feelings, memories, views, or perspectives. Sugiura invites viewers to experience the mindset of floating between their memories and views/hopes/fears about their future through his art works.

The works reject the conventional understanding of painting by asking the viewer to question their self-existence.

About his work, Sugiura says:
My body of work is an experiment in rejecting conventional views of painting, reconsidering the very act of viewing, and reassessing traditional oil painting. I want to draw viewers into the imagination of these paintings by depicting characters that represent various modern-day questions such as: Are we alive or dead? What is gender? Are humans something else? Real or virtual? At the same time, I also want to push viewers back into reality through the inclusion of blank spaces and the arrangement of actual materials in various places around the canvas.

In my work, there is also a feeling of being beckoned to return to a world of imagination. Everything can be interpreted in many ways depending on the extent of contact. Such a view is connected to and inspired by the philosophical and Zen Buddhist perception of the world, which I feel is an important way of thinking in people’s lives.

Ultimately, while my artwork certainly takes the form of painting, it is not painting in the traditional sense. It represents something yet does not represent anything. There is meaning, and yet it is meaningless. It is retinal artwork, yet it is simultaneously ideological art. While there are correct interpretations of this artwork, at the same time, there are no incorrect interpretations.

About the artist
Akihiko Sugiura is originally from Hyogo and now lives and works in Tokyo. He is a graduate of the Faculty of Business Administration at Yokohama University. After teaching himself art for two years, he gave up the business world and devoted himself to art in 2015. He has participated in the Shell Art Award Exhibition and shown work in Japan, with his first solo show at Niche Gallery in Tokyo in 2018. He is the 2019 winner of the Artist in Gallery Prize from Arte Laguna. As a finalist for Arte Laguna Prize 18.19, he is showing his work in the US for the first time.