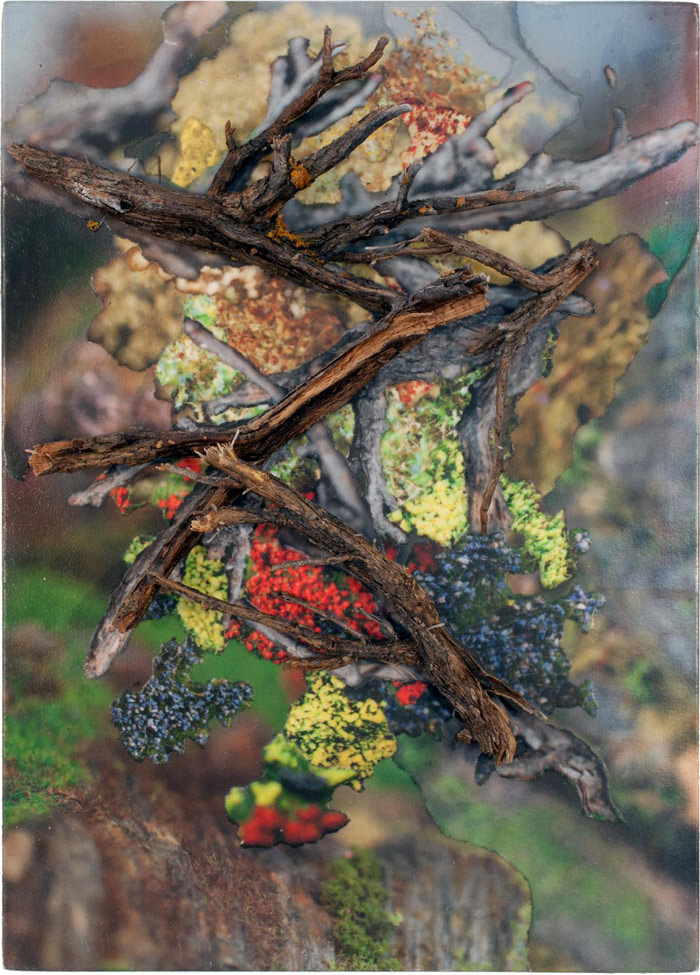 Arcadia is part of the Peloponnese peninsula in Greece, which in Greek mythology was the home of the god Pan. During the Renaissance, Arcadia was celebrated as an ideal, harmonious wilderness. Using this region as the namesake for his new exhibition, Giobbi’s “Arcadia” is a linear body of work across a multitude of mediums that expresses an idealized, immaculate nature as it might appear if materialized from embellished childhood recollections. In production for over three years, this new series explores the phenomenon of early memories in one’s life as they become increasingly more fictitious over time, heightening the beauty, innocence and freedom of what might have been a more complicated past. In a turbulent world of spontaneous violence, political uncertainty, and increasingly diverging financial brackets, a safe place is needed. Be it physical or mental, respite and beauty are vital elements for a good life.

Central to this exhibition is Giobbi’s recurring motif, the Möbius strip, which was first employed for his 2014 exhibition “American Iron” at 101/EXHIBIT. This ever-looping form is again the basis for the flagship piece of this exhibition, the grandiose mobile (and the show’s title track) Arcadia. At over nine feet wide and five feet tall, this massive sculpture is suspended by a single point and is left to rotate under its own volition. Its surface is the product of over two years of meticulous attention, as Giobbi has hand-made and coated the piece with hundreds of trees, flowers, moss, a river, boulders and cliffs for the viewer to explore. For the exhibition, Giobbi has also created a smaller, sister version to Arcadia, as well as two additional satellite pieces: Arcadian Ocean and Arcadian Snow. 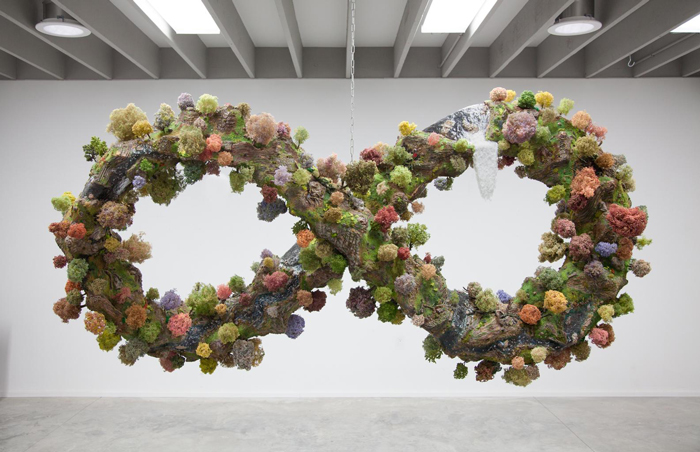 Further, hundreds of photographs were taken of the surfaces of the mobiles. Once the images were developed, Giobbi broke them apart and rearranged them to create numerous Tinies, his trademark photo-collages under beeswax, all at the 7×5 inch format. Whereas Giobbi has historically used only photographs, the new Tinies in “Arcadia” also bring into play the materials used for the mobiles. Here, a type of sculptural relief effect is at hand. These Tinies challenge today’s often flippant quests for source material that, more often than not, starts and stops with our digital cameras or the Internet. By contrast, Giobbi’s pictorial works could not exist without the countless hours of work put in to create the lifelike surfaces of his sculpture.

A Naturalist fantasy, “Arcadia” is meticulously realized through mobile sculpture and photo-collage. From an art historical perspective, Giobbi references the utopian visions of Hudson River School painters like Frederick Edwin Church or Thomas Cole, but he is aesthetically more in line with the sublime visuals brought on by an MDMA serotonin surge. The artistic experience is a self-referential orchestration of an untouched landscape; nature as we imagine it would be without all that has ever threatened it. Hence, viewers will temporarily leave behind their day to engage with an intricately fictitious tour over oceans and snow, across meadow grounds, through trees and across rivers, with shadows on flower petals as light fades behind rocks and brightens across a waterfall. These works move ever onwards to the greater splendour of the four seasons, only to repeat again, per the structural nature of a Möbius strip.