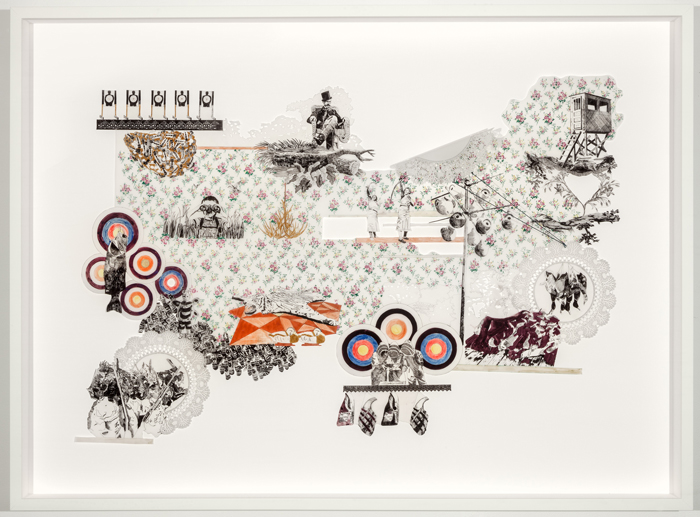 Known for her meticulous drawings on hand-cut mylar, Laura Tanner Graham’s “Campaign Julienne” is a series of new work with underlying socio-political commentaries.

Laura Tanner Graham says about this work:
This body of work began with the start of the presidential primaries. The months before and after the election managed to uncover many unresolved battles of America’s complicated history–contentious race relations, sexism, nativism, and an ever-growing wage gap. The drawings in this exhibition record the inconsistencies of a society that simultaneously proclaims itself to be “post-racial” and “post-gender” while identifying with a “pull-yourself-up-by-the-boot-straps” mentality. I collage historical publicized images–advertisements, campaign posters, newspaper photographs and printed textiles–that parallel our current political and social climates into a singular narrative composition to document the cyclical and systemic nature of  marginalization in America. The drawings capitalize on America’s propensity for nostalgia and decorum, luring the viewer into facing these inequities through the detached lens of that which has already happened. 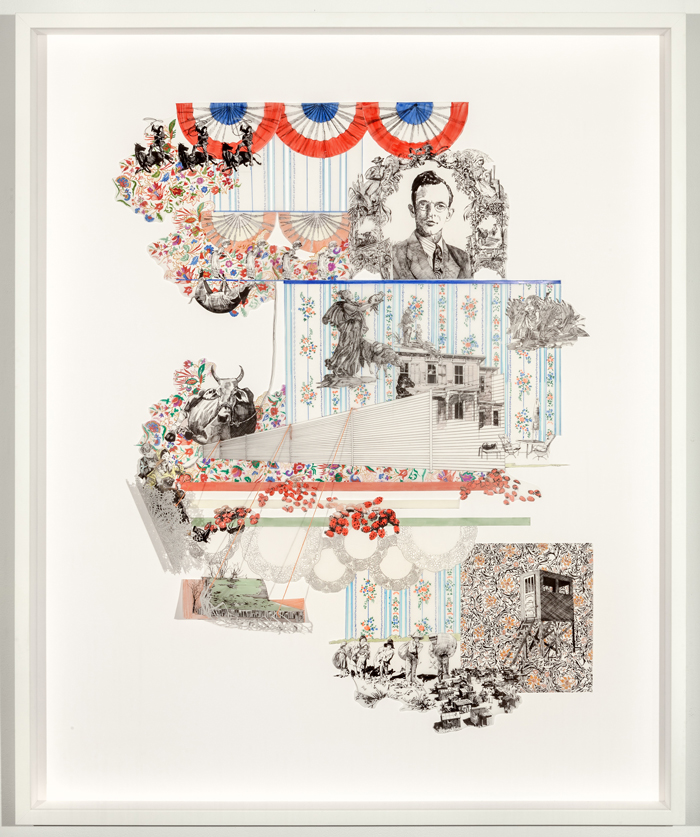 Laura Tanner Graham’s drawings and installations are often discussed as part of the Southern Gothic
literary tradition, sharing similar themes with authors such as Flannery O’Connor and Eudora Welty.
Borrowing from old advertisements and culturally specific printed textiles, Graham parallels historically
significant events of the past with those of the present to explain the cyclical nature of Western politics.

Graham received her MFA from the University of Illinois at Urbana-Champaign and a BFA from Florida State University. She has exhibited nationally in both group and solo exhibitions including the Weatherspoon Art Museum in Greensboro, North Carolina; the Ogden Museum of Southern Art in New Orleans; and the Athens Institute of Contemporary Art in Georgia. She has also been a visiting artist at Tulane University and the University of Alabama. In 2016, Graham was awarded a fellowship and residency at the Ucross Foundation and the Vermont Studio Center. Graham is currently an Assistant Professor in the School of Art at the University of Arizona in Tucson.

← WORDplay
The Silly Side of Science →