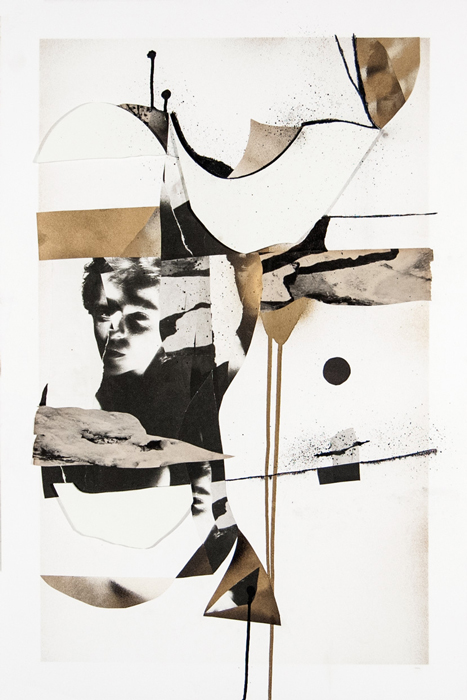 The works in “Mirrored Infinity” explore ideas of reflection, transformation and personal discovery. Drawing inspiration from Jorge Luis Borges’s short story, “The Approach to Al-Mu’tasim”, John Whitlock constructs broken narratives that reflect points of thought around existential and spiritual uncertainties. Whitlock creates small black-and-white collages that are then scanned, and repurposed into larger mixed media compositions, stretching the boundaries of their original framework. Simple, familiar shapes are combined to create quasi-religious iconography; Gold is introduced as both a symbol of preciousness and an implication of age. For his video installations, Whitlock has run a video feed into an infinite feedback loop that he animates with simple camera movements, creating self-reflexive geometric distortions. The pulsing circular patterns and reflective mirror fragments manifest real-time, infinite transformation. As the illusory literary critic in “The Approach to Al-Mu’tasim” might put it, “Mirrored Infinity” is a “detective story with a mystic undercurrent.” It’s about finding yourself in the search for another.

John Whitlock is an artist and musician from Brooklyn, New York working in collage, assemblage, video and sound. Inspired by popular graphic culture, and the overabundance of media stimuli present in our society, John’s work attempts to evoke familiarity through abstraction. John has been exhibited, and featured in various publications internationally, including a four-page feature in Gestalten’s Age of Collage: Contemporary Collage in Modern Art.