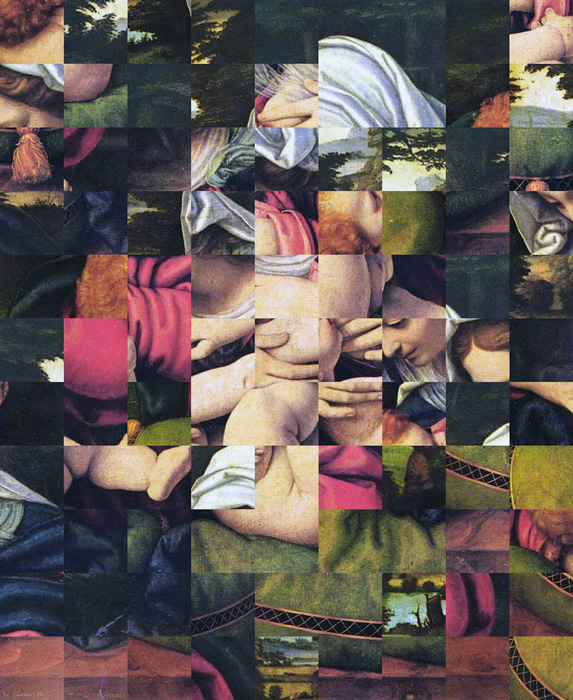 Working with multifaceted, multiplied imagery, Rashid Rana splits the visible universe apart in order to remake it anew. In sculpture, video and photographic prints, Rana transforms snapshots of shop signs in Lahore into abstracted cityscapes or renders reproductions of Old Master paintings as digital fields of colour. Utilising the grid structure, the artist has recently begun to rearrange famous paintings such as The Rape of the Daughters of Leucippus (1618) by Peter Paul Rubens and The Oath of the Horatii (1786) by Jacques Louis-David, scrambling these famous compositions into pixelated and codified puzzles.

Rana’s splicing and stitching technique can be carnal and violent, as in this ongoing series of brutally lacerated and reassembled Baroque and Neo-classical paintings, collectively known as the “Transliteration Series”. For his first solo exhibition in Italy, Rana has also reflected the legacy of the surrounding city in his source material, choosing paintings by artists hailing from Milan, such as Andrea Solari and Cesare da Sesto. While the originals are held in the Louvre in Paris and the National Gallery in London, Rana symbolically returns the images to the source of their creators, albeit visually distorted and temporally displaced in the process. Rana complicates and realigns such divided notions as figuration and abstraction, manipulation and reality, but also succeeds in knocking the world off its axis and transcending both traditional and technological means of communication.

Widely considered to be the leading Pakistani artist of his generation, Rashid Rana first came to prominence in South Asia alongside artists such as Shazia Sikander and Subodh Gupta, before gaining wider, international exposure after the millennium. Rana’s work straddles both Eastern and Western art practices, drawing equally from Islamic forms as from the Renaissance, French Realism or Modernism.

Rashid Rana was born in Lahore, Pakistan in 1968. He lives and works between Lahore and Toronto. He trained as a painter at the National College of Arts in Lahore and at the Massachusetts College of Fine Arts in Boston, before joining the faculty of Beaconhouse National University in Lahore, where he still teaches. Recent solo exhibitions include: Labyrinth of Reflections at Mohatta Palace Museum, Karachi (2013); Cornerhouse, Manchester (2011) and Musée Guimet, Paris (2010).