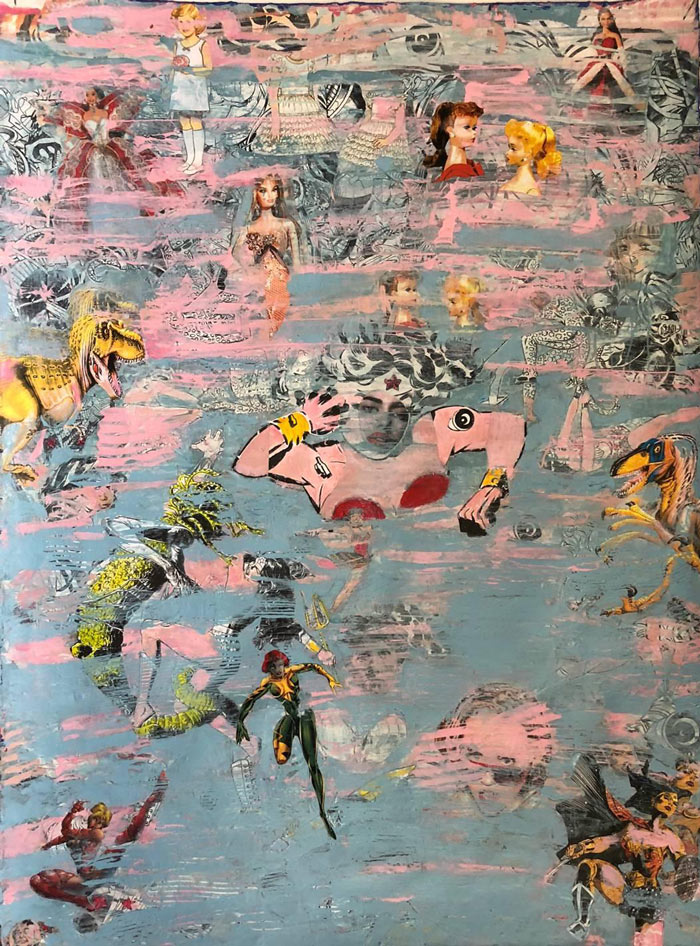 “Unexpected Realities: Comics, Culture and Society in Contemporary Art”, curated by Bruce Weber, features the work of seven artists who engage in fascinating ways with the iconography of comic book superheroes and touch on our fixation and embrace of pop culture.

Susan Newmark’s mixed media works integrate collage, paint, photo imagery, found objects and fragments from popular culture to explore narratives and storytelling, place, memory, nature, and the human body. A pair of works in this exhibition are appropriated from Japanese comics, and her Wonder Woman piece is from a new series exploring different ethnicities.

Brooklyn-based artist K. Saito is devoted to drawing, but also creates mobiles, animated short films and videos. His superheroes are simply rendered with a minimum of detail and with a sense of gleeful spontaneity that tickles the underbelly of the crowded and dramatic action-based world of the comic book superhero.

Ai Kijima initially learned the crafts of sewing, knitting and crocheting from her grandmother in Kyoto. She joins together the images she discovers on bedsheets, pillowcases, clothes and related materials at thrift stores and secondhand markets. These quilted fabric pieces are filled with a dizzying array of images drawn from pop culture, many of which feature superheroes derived from comic books.

Michigan-based Mark Newport has long identified with the genre of comic book superheroes and drawn on this imagery to create knitted costumes, prints and videos which portray him performing in his garb. A skilled knitter, he fashions outfits for superhero characters that hang on coat hangers where they sag, with a mix of comedy and poignancy, under their own weight.

Peter Kernz’s character-based drawings were inspired by viewing the film JFK and reading High Treason: The Assassination of JFK and the Case for Conspiracy by Harrison Edward Livingstone. In his drawings, Kernz explores the dark atmosphere of the case. He states, “For 7 years I gathered my material in literature and each night I took my weapons of choice: gouache, India Ink, a range of drawing pencils, and a projector.”

Los Angeles-based artist Aaron Noble creates large scale site-specific wall paintings along with related drawings, prints and works on canvas. The superhero comics of the 1960s and 1970s were his aesthetic training ground, and through them he became dramatically engaged in exaggerating and abstracting the human form.

Don Perlis’ paintings of Times Square are filled with a variety of colorful and disturbing characters who act in perverse and violent ways. Many of them are garbed in the costumes of comic book superheroes, who, ironically, uphold the stereotypical image of New York as a sinister and menacing place.

Curator Bruce Weber is also a poet and historian of American art. He has been a curator at various museums, most recently serving as Curator of Paintings and Sculpture at the Museum of the City of New York. He has published extensively on the subject of American art.

Hours:
Saturday-Sunday, 1-6PM
or by appointment