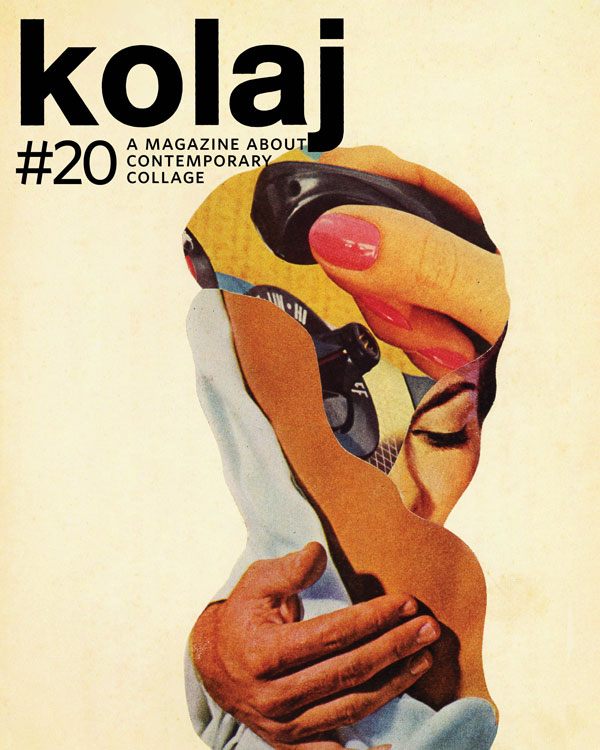 “We have endeavoured to be open to collage in all its forms–analogue and digital, assemblage and photomontage, painting and video, and so on. In the five years we have published the magazine, we learned a great deal. If I were asked to summarize, I would say this: We have much more to learn.”

He continues to talk about the future of the magazine.

On the cover of Kolaj #20 is a work by Tokyo-based collage artist ChangGang Lee titled She’s a diamond. I’m the rock. Lee employs distortion, glitch, and melding to make analogue collage that uses vintage media to tell timeless stories in a contemporary manner. A portfolio of his collage appears in the issue, along with portfolios by Anastasia Samoylova (Miami, Florida); Ken Ralidis (Los Angeles, California); Felicia Dadak (Truckee, California); and Pauline Tonglet (Namur, Belgium), whose Vista appears on the back cover.

From the world of collage, we bring news about Nicolas Narbonne‘s assemblage that won Grand Prix at the 2017 MTL en Arts festival and we share a call to artists from Edinburgh.

Kolaj #20 is the first print edition since the magazine’s launch of Collage Books, an online tool for organizing, documenting, and cataloguing books in which collage plays an important role. The issue debuts the in-print version of the directory and we write about the collage autobiography Where Quirky Meets Menacing by San Francisco-based collagist Kim Smith.

We get into Duncan Poulton‘s digital and video collage with a profile and interview of the Birmingham, UK artist and explain how he is pushing the idea of collage in interesting ways.

Steven McCarthy remembers Willis Guthrie, a collage artist who died in 2016. Guthrie altered science books in a manner that “disarms and charms the viewer.”

“Whether you love [my art] or hate it, it’s there and valid and if you try to rip it down, I’ll just put it up again. There, and somewhere else, and everywhere. I’m not going away. I’m just getting started.”

In the first-person article, “Breath Between the Cuts”, Paso Robles, California artist Hope Kroll recalls how a collapsed lung and old sketchbooks led her to a life of collage. She writes about her process, the catalysts behind her collages, and how she creates large, three-dimensional work.

Ever wonder why so many collagists use space imagery in their work? In “Affinity for the Infinity”, Steven M. Specht, Ph.D. investigates the use of galactic, stellar and planetary elements in collage and offers some interesting insight into the psychology behind the imagery.

“After experiencing awe-eliciting stimuli, individuals will report that they feel like they are part of something bigger than themselves and in turn will act in more prosocial ways.”

In the next installment of Collage Taxonomy, we offer a definition of Subtractive Collage in which we attempt to distinguish between the technique and the category. The term was suggested by collage artist Lee Honey and we discuss collage by Susan Wicker, Jacob Spriggs, and the title sequence for the HBO drama, The Leftovers.

And as always, a Kolaj Artist Directory.

Already subscribed? Don’t worry, you will be receiving your copy by 15 August.

← The Fabric of Fantasy
A Technicolor, Fairy Tale Place in the Sky →