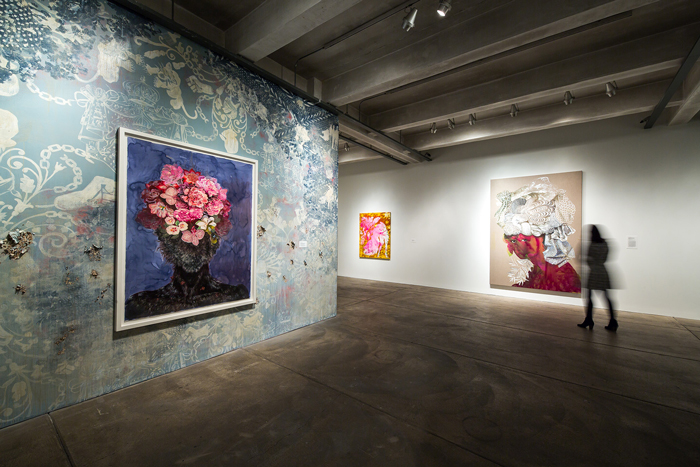 One essential truth for those of us who study, follow, and make collage is that the mixture of various elements produces the best results. Collaging ancient patterns with modern photography, for example, results in dynamic images. Art that blends multiple visual languages speaks directly to a contemporary experience where disparate aesthetics swirl in the world around us. The same is true of people. Most of us live with mixed backgrounds, competing identities, and dueling cultures. Contemporary life is about bringing these things into harmony, reveling in their strengths, and celebrating their beauty.

In his book, Future Humans: Inside the Science of Our Continuing Evolution, evolutionary biologist and science writer Scott Solomon speaks to a “reshuffling of human populations [that] is affecting the very structure of the human gene pool.” Something similar occurs in cultures when they mix: people gain greater self-awareness and a better capacity to understand others. It also makes for innovative and impactful artwork.

A prime example of this is Brooklyn-based, Afro-Latina artist, Firelei Báez, the child of a Dominican mother and a Haitian father. Before moving with her family to Miami, she was raised in Dajabon, a city at the junction of the Domincan Republic’s verdant mountains and valleys and Haiti’s stark, barren, deforested landscape. In Miami, she learned of a different contrast in landscape. The racial fluidity of the Caribbean was replaced with the striking black-or-white caste system of the United States. This life experience informs her intricate works on paper, canvas, and large-scale sculpture. 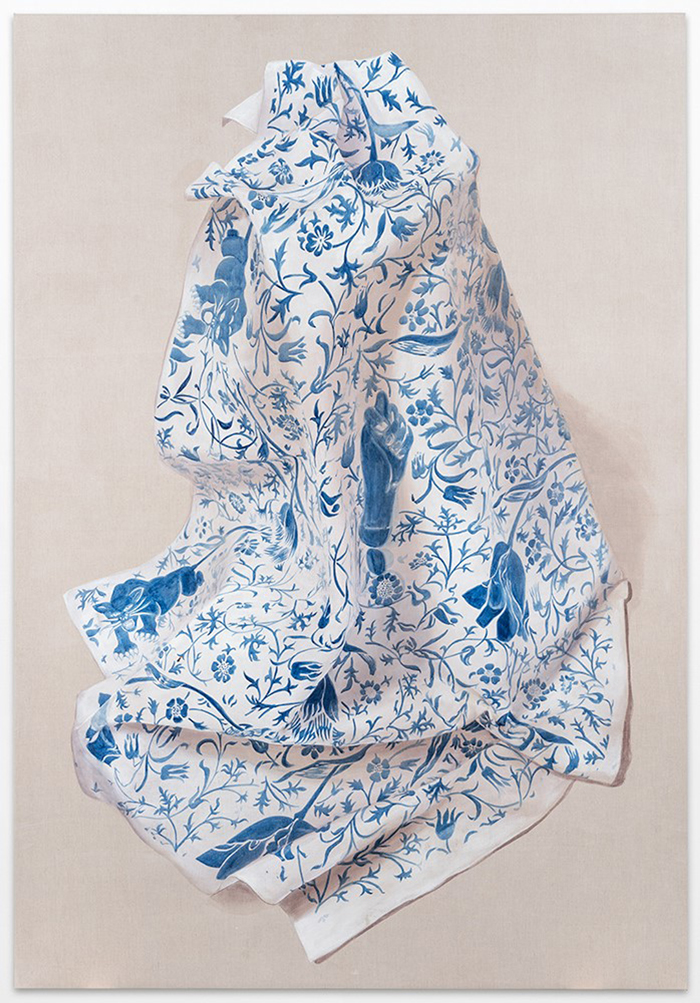 “Through a convergence of interest in anthropology, science fiction, black female subjectivity and women’s work, her art explores the humor and fantasy involved in self-making within diasporic societies, which have an ability to live with cultural ambiguities and use them to build psychological and even metaphysical defenses against cultural invasions,” writes Gallery Wendi Norris. In short, Báez’s artistic practice teaches us how to live in a complex world, doing so with beauty and grace.

At Kolaj Fest New Orleans, we are pleased to offer a lecture about Firelei Báez by Caribbean art historian Mariah Morales. “What Báez is doing is creating and piecing different histories of subjugation and repression together on a unified symbol of subversive resistance,” said Morales. “It important for the people of New Orleans to know about Firelei Báez because she addresses how the city of New Orleans has such a rich past of resistance against dominant powers. And Firelei Báez shows the people of New Orleans their history or, more accurately, the free black women’s or Libres’ history and how they worked within a restrictive, white male patriarchy to show resistance against subjugation through their beautiful headdresses, headdresses which also show the connection to West Africa.”

In her presentation, “Road Map of Symbols”, Morales uses two works, Sans-Souci (This threshold between a dematerialized and a historicized body), 2015 and Bloodlines (past forces of oppression become frail and fallible), 2015, to show how “Báez imbeds images in her artwork that touch upon slave culture in Africa, Hispaniola, and the rich cultural past of Louisiana. The subtle but powerful historical narrative found in Báez’s multi-layered work entrances and engages the viewer; the true weight behind the symbolic images embedded in her work resonates acutely. Báez depicts acts of defiance while coupling them with other strong moments of resistance that allude to the profound. One act of defiance may derive strength and inspiration from another act of defiant strength, creating a powerful wave of resilience.”

Mariah Morales holds an MA in Caribbean Contemporary Art and a BLS in Caribbean History & Communication from Bowling Green State University in Ohio. In the course of her studies, she has curated exhibitions and served as a conference moderator. She has presented her talk, “Firelei Báez: Road Map of Symbols”, at the 2018 Africana Conference at Bowling Green State and at the 2018 Caribbean Association Annual Conference in Havana. 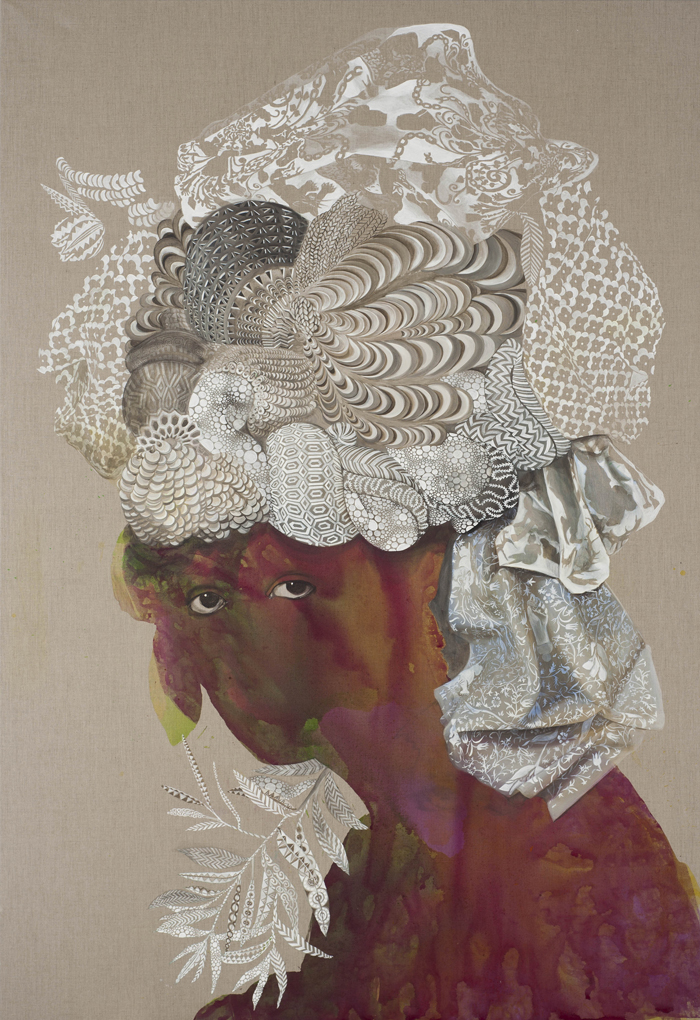 Originally from Santiago de los Caballeros in the Dominican Republic, Firelei Báez lives and works in New York City. She holds an MFA from Hunter College and a BFA from The Cooper Union’s School of Art. She also studied at The Skowhegan School of Painting and Sculpture. Her work has been shown extensively in solo exhibitions in museums across the United States, as well as with the Pinchuk Art Foundation’s “Future Generation’s Art Prize” exhibition at the 2017 Venice Biennale. Her work was featured at New Orleans’ Prospect.3 in 2014, curated by Franklin Sirmans. A major solo exhibition of her work, “To See Beyond”, is at the Contemporary Arts Center Cincinnati, May 18-August 19, 2018. Báez’s large-scale outdoor installation is featured at the Akademie der Künste at the 10th Berlin Biennale for Contemporary Art, “We don’t need another hero”, June 9-September 9, 2018. She has held residencies at The Headlands, The Joan Mitchell Center, The Fine Arts Work Center, The Lower East Side Print Shop, and The Lower Manhattan Cultural Council Workspace. Her work is in private and public collections around the world. She is the recipient of the 2018 CAA Artist Award for Distinguished Body of Work, the Joan Mitchell Painters and Sculptors Award, the Jacques and Natasha Gelman Award in Painting, the Catherine Doctorow Prize for Contemporary Painting, and the Chiaro Award from the Headlands. In 2015, The Pérez Art Miami Museum published Firelei Báez: Bloodlines, with an introduction by the museum’s Director, Franklin Sirmans, an essay by Assistant Curator María Elena Ortiz, an interview with Naima Keith, and a contribution by writer Roxane Gay. Firelei Báez is represented by Gallery Wendi Norris in San Francisco, www.gallerywendinorris.com.

Sans-Souci (This threshold between a dematerialized and a historicized body)
108″x74″
2015
The Andy Warhol Museum, Pittsburgh, Pennsylvania