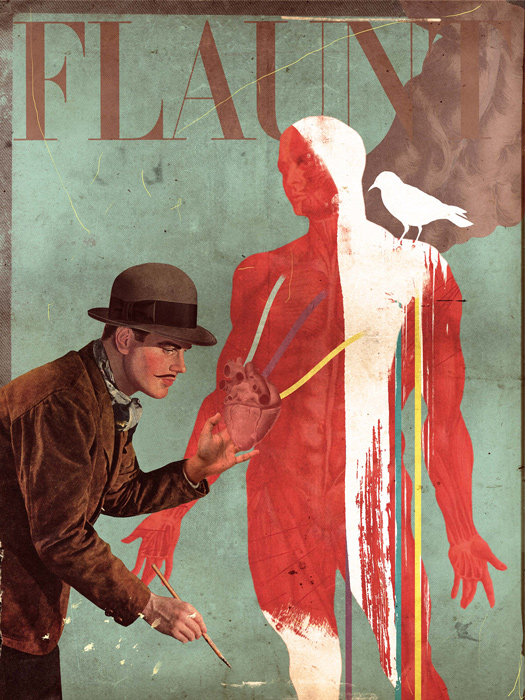 Collage artist Laurindo Feliciano, a self-taught Brazilian artist and illustrator living in France, won the The Association of Illustrators (AOI) Illustration Award 2014 in the category of Editorial Professional. He won the award through work he did in collaboration with Flaunt Magazine, which devoted an entire issue to fabrication. Flaunt‘s art director, Jim Turner, asked Feliciano about his process, which became an article on his vision of fabricating collage. Feliciano illustrated the creative process in fashion and art by using old images in a contemporary setting. He mixed old photos and scientific images. Feliciano scanned the images, cropped them in Photoshop, and turned them black-and-white so he could use his own colour palettes. Using digital painting techniques and filters, he transforms the elements of an image. As an award winner, Laurindo Feliciano’s work will be displayed with the other winners in the Terrace Rooms at Somerset House in London and then tour to multiple venues across the United Kingdom. A publication of this exhibition will be available in October 2014.

Image:
illustration for Flaunt Magazine
by Laurindo Feliciano
Courtesy of the artist