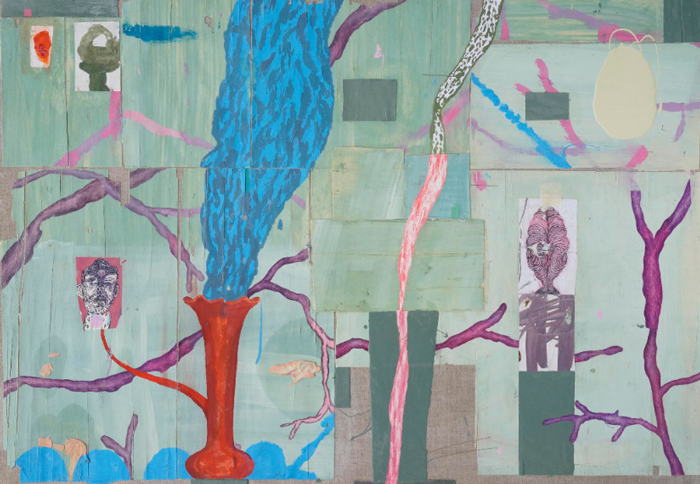 Henrik Drescher’s “big rock candy mountain” is the conclusion of work that began in China’s Yunnan province and finished a decade later in Brooklyn. The series draws on Chinese landscape paintings as a source, and is as much about the natural world as it is about inner nature.

As a result of many years of traveling around the world, Drescher’s working method involves collecting and archiving ideas into bookworks, which are later used in his paintings. The “big rock candy mountain” series was initially created in China on large wooden panels, later for the sake of transporting them they were sanded down to veneer thickness and cut into smaller more manageable quadrants. The final sheets were transported to New York City where they were re-conjured into the pictures, and are being displayed in this exhibit.

Drescher’s work is in the collections of the Getty Museum, Los Angeles, Victoria and Albert Museum, London, and the Museum of Modern Art, New York. He is also known as a prize-winning author and illustrator.

Hours:
Wednesday-Saturday, 11:30AM-5:30PM
and by appointment

← Arcadia
Biometrics of the Face →