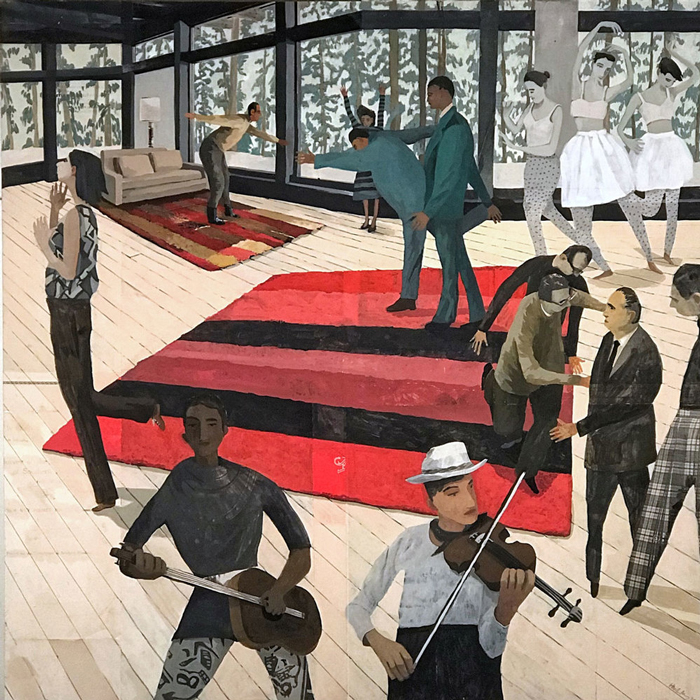 “Feast of Fools” is Vermont artist Hannah Morris’ solo exhibition of painted collages and soft sculpture installations exploring the intersection of the sublime, the absurd, and the mundane in recognizable moments and places.

The artist says about her work, “I fabricate visual stories and scenes by arranging, refashioning, and building upon found images. Using tones, marks, typography, paint, and fabric, I create layered visual languages that allow for multiple interpretations of the details or of the entire scene. I want to trigger a viewer’s memory, for I believe that vision is shaped by thousands of remembered moments.”

Born in Southern Vermont, Hannah Morris studied art, writing, and documentary studies at Bates College. She spent the next several years in Maine and Vermont, as a cook, arts administrator, teacher, exhibition and program coordinator, and eventually, as a graphic artist. Accepted into the Rotary International Ambassadorial Scholarship program, she traveled to the Western Cape of South Africa with the initial plan to study botanical illustration for one year. Nearly six years later, she left South Africa, having completed an MPhil in Illustration (Visual Arts) focusing on narrative illustration, and having worked as a freelance illustrator, visual artist, graphics teacher, and arts program coordinator. She moved back to the United States, spending the next three years in Manhattan and Brooklyn working as a graphic artist for Whole Foods Market. In 2010, she returned to Vermont and settled in Montpelier. She has shown her work in solo and group shows in Cape Town, New York City, and throughout central Vermont. She designed and illustrated an award-winning picture book published in Cape Town, and attended several artist’s residencies, including Instituto Sacatar in Bahia, Brazil, the Turkey Land Cove Foundation on Martha’s Vineyard, Massachusetts, and Studio Place Arts in Barre.

Image:
You Don’t Need a Halo to Look Heavenly, Angel!
by Hannah Morris
30″x30″
gouache and paper collage on board
2018
Courtesy of the artist