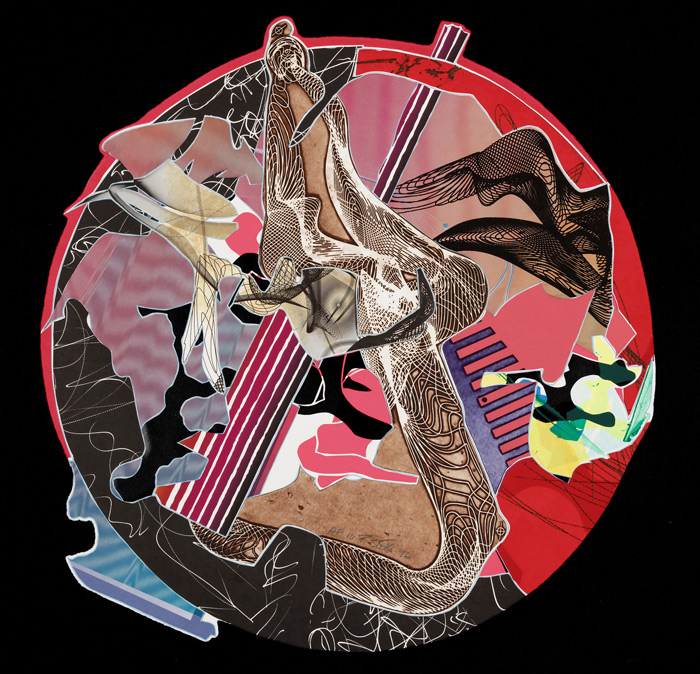 The acclaimed American artist Frank Stella (born 1936) is renowned for his career-long innovations in abstraction in a variety of media. In addition to his early minimalist work from the late 1950s and 1960s and his later efforts to disrupt the accepted norms of painting, Stella made groundbreaking achievements in the print medium, combining printmaking processes, mining new sources for imagery and expanding the technical capacity of the press.

“Frank Stella Unbound: Literature and Printmaking” focuses on a revolutionary period in the artist’s printmaking career, between 1984 and 1999, when Stella executed four ambitious print series–each of which was named after a distinct literary work: the Passover song “Had Gadya”, a compilation of Italian folktales, the epic American novel Moby-Dick and The Dictionary of Imaginary Places. In the four series titled after these sources, Stella created prints of unprecedented scale and complexity, transforming his own visual language–as well as his working process in all media–and reaching a technical and expressive milestone in printmaking.

“Frank Stella Unbound” is the first exhibition to focus exclusively on the vital role that literature played in the artist’s powerful exploration of the print medium. The exhibition features 41 prints from four of Stella’s major print series, alongside historical editions of their literary sources on loan from the Princeton University Library. The exhibition was organized by the Princeton University Art Museum in conjunction with the 60th anniversary of Frank Stella’s graduation as a member of the Class of 1958. After the exhibition closes in September, it will travel to the Museum of Contemporary Art Jacksonville in Florida.

In 1982, Stella began working on a print series entitled “Illustrations” after El Lissitzky’s “Had Gadya”. The Russian Constructivist artist El Lissitzky (1890-1941) had created a suite of 11 gouache illustrations, one for each of the verses of the traditional Passover song, plus a frontispiece and dust jacket, and published these as color lithographs in a bound volume in 1919. Stella, in response and tribute, produced one print for each of Lissitzky’s illustrations plus additional prints as front and back covers, to explore the ways in which the structure of a literary text–specifically a verse-based narrative–could inform and be communicated as signs and shapes in a language of abstraction. It was a watershed moment in Stella’s printmaking career. Working in his home studio and incorporating collaged elements, illusionistic graphics and multiple techniques, Stella broke both the rectangular frame and the flat unified surface of traditional prints in the dynamic compositions of this series.

Stella’s “Italian Folktales”–eight intaglio prints that incorporated elements derived from previous paintings–followed in 1988-89 and was based on the colourful anthology of folklore compiled and retold by Italo Calvino and published in Italy in 1956, translated into English in 1980. As in the oral tradition of folktales, these prints develop as variations, with intricate overlapping shapes and marks that subtly change from one state (or telling of the story) to the next. The “Italian Folktales” series reflects Stella’s sustained interest in using his own work as a springboard for the development of ideas. 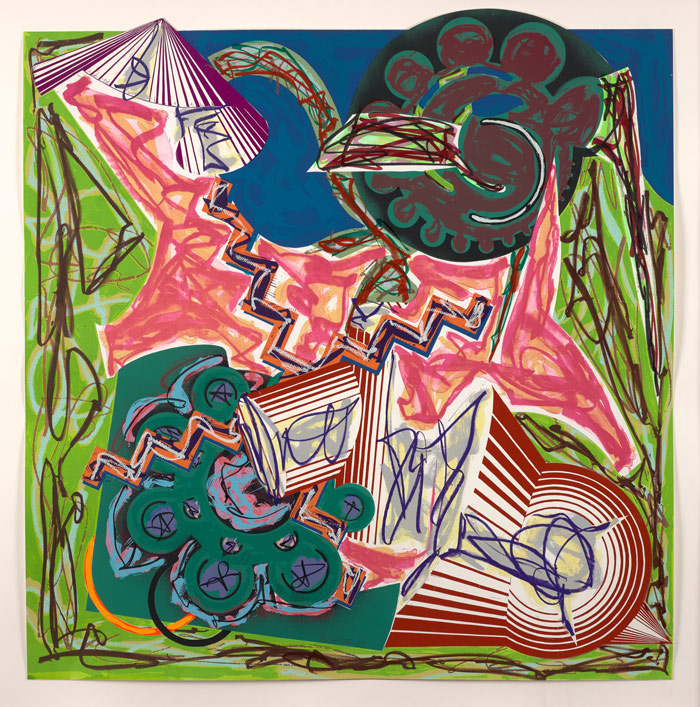 Monumental in scope and scale, the “Moby Dick” prints depict scenes from Herman Melville’s classic novel, published in 1851 but recognized as a canonical work of American literature only after the turn of the 20th century. In 1930, the American artist Rockwell Kent (1882-1971) was commissioned to create a series of graphic, black-and-white woodcut prints to illustrate a deluxe edition of the novel, as well as a condensed trade edition. Stella was inspired by visits to the Coney Island Aquarium in Brooklyn and by his subsequent re-reading of the novel. In total, between 1989 and 1993 Stella created more than 266 individual works–paintings, sculptures and prints, all titled after the 135 chapters, plus appendices, of this epic novel. The 37 large-scale prints that Stella developed for his “Moby Dick project” combine a spectacular range of graphic media, and amount to one of the most ambitious and technically challenging printmaking series of the 20th century.

First published in 1980, The Dictionary of Imaginary Places by Alberto Manguel and Gianni Guadalupi is a witty encyclopedia of fictional lands and places from literature, with fanciful maps and illustrations. Stella evolved the compositions for the richly complex prints he made in response by creating collages that he cut, tore and layered together from myriad sources, including excerpts drawn from his extensive archive of printed proofs, computer renderings, industrial printing plates and found images reproduced from old pattern books. Translated by Stella’s studio collaborators at Tyler Graphics into dazzling combinations of mixed techniques, the Imaginary Places prints utilize nearly every reproductive process known to the history of Western art, printed on single sheets of handmade paper.