“Some Assembly Required” at Cedar Rapids Museum of Art 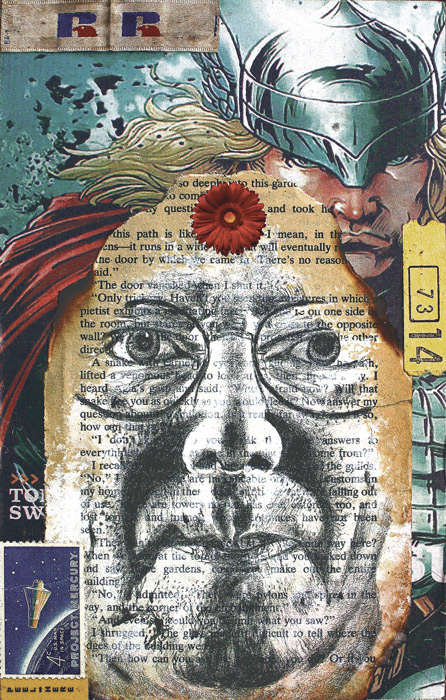 “Some Assembly Required: Collage and Assemblage”

In the 19th century, before the emergence of the term collage, the gluing together bits of paper—tickets, photographs, printed texts—was largely a craft, a technique used for scrapbooks and other domestic memorabilia. In the early 20th century, however, European artists such as Georges Braque and Pablo Picasso started to incorporate bits of paper into their paintings, elevating the activity of collage into a fine art. Collage was born. Assemblage, the three-dimensional equivalent of collage, was not far behind.

“Some Assembly Required: Collage and Assemblage” takes a look at the breadth and depth of collage and assemblage, especially in the hands of American artists.

Both collage and assemblage art began as a radical new way of art-making, turning its back on more traditional practices of painting and sculpting. Collages and assemblages evoke a delight in everyday things and a somewhat subversive attitude toward the “established” art world. The use of non-art materials, or even junk from the everyday world, often evokes a rawness, and occasionally poetic, qualities.

In addition to Iowa’s famous artistic son, Grant Wood, this exhibition also features the work of many Iowan artists: Chuck Barth, John Beckelman, Velga Easker, Robert Kocher, Mauricio Lasansky, Richard D. Pinney, John Schwartzkopf, Bill Stamats, David Van Allen, Stan Wiederspan, and Mary Zeran. These and other artists from around the country have created collages and assemblages inspired by a range of topics from beauty to warfare, and feature familiar popular culture icons as diverse as Aunt Jemima and Thor.

Some of the works on view date back to the 1920s, near the origin of the technique, as seen in pieces such as Grant Wood’s Lilies of the Alley. Others demonstrate the long-lasting impact of these early experiments on multiple generations of artists. In each artist’s hands, however, collage and assemblage takes on a different form, reflecting each artist’s unique vision.

This exhibition has been made possible in part by the Richard D. Pinney Exhibition Fund and a Program Fund Grant from the Greater Cedar Rapids Community Foundation.

Image:
A Thousand Words #9
by Len Davis
collage and graphite on newsprint and panel
2010
Museum purchase, 2011.070
Image courtesy of the Cedar Rapids Museum of Art