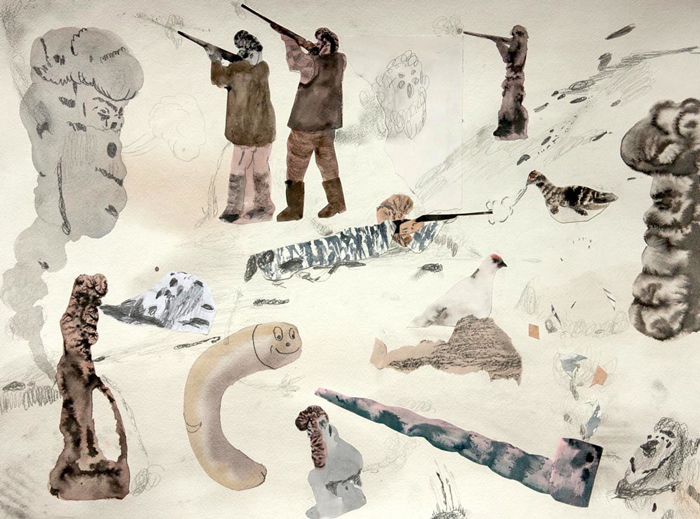 Gudmundur Thoroddsen’s “Hobby and Work” explores the tropes of modern masculinity. Thoroddsen merges the antiquity-laced bearded busts of male gods with activities such as basketball, hunting, and brewing beer. In his group scenes in gouache, pencil, collage, and ink on paper, men are organized as if in a Byzantine painting, without Renaissance perspective, but rather a staggered organization. Employing an often cartoonish style, Thoroddsen sometimes veers into boyish naughtiness, like dirty doodles carved into a school desk. Thoroddsen charts a circle of manly aspiration: winning a trophy, competing for points, length of beard, or number of birds killed. With a pallid colour scheme of vaguely Eastern European or 1930s colours, Thoroddsen’s drawings exist in a timeless haze. The whiff of nostalgia for days of clear gender roles and adherence to expectations of masculinity is undermined by his often sketchy style and blatant blasphemy: the recurrent defecating “gods”, the silly or awkward figuration, the smiling phallus that acts as ultimate emasculation.

Along with the works on paper, Thoroddsen continues his carved wood heads with a rougher style and blended identity. The exhibition includes a collection of ceramic trophies, glazed in soft pastels, pointing out the sadness of constant and meaningless one-ups-man-ship, tiny awards with steadily diminishing power. The deliberately clumsy and crude handling of both the drawings and sculptures undercuts the quest for perfection and achievement, or perhaps is a reflection of the ethic of “just getting it done” and the fear of “prettying“ it up.

In “Hobby and Work”, Thoroddsen starts with the seemingly banal and finds potency in each activity he tries, whether hobby or work, which in his case, solipsistically, is making art. He points to a particularly male fascination with being engulfed by hobbies- mastering a new skill, learning a vast repository of obscure facts, and seeking escape from normal life by shutting oneself within a separate world. Bushy beards connect a contemporary trend with stereotypes of Vikings, ancient gods, and lumberjacks, and yet an artist can feel inadequate compared to explorers and physical doers. As such, the male in Thoroddsen’s exhibition becomes a tragicomic exemplar of the artist, desperately and naively hoping to accumulate manliness but always falling short.

Thoroddsen completed his MFA at the School of Visual Arts in New York. He has been included in exhibitions in Reykyavik, New York, Berlin, and Grand Rapids, Michigan. He was the recipient of a Fountainhead Residency in Miami, Florida in 2012, and of artist grants from the Ministry of Cultural Affairs, Iceland in both 2012 and 2013. His work appears in the 2011 publication Icelandic Art History from late 19th Century to Early 21st Century, as well as the New Museum’s Younger Than Jesus: Artist Directory published in 2009.