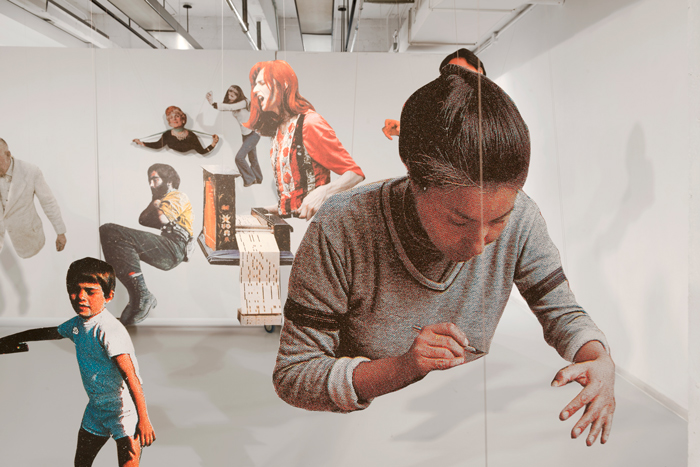 “Cut-Outs” investigates how images create and convey meaning. By removing fragments from their original context (National Geographic magazines) and suspending them at 1,000 times their original size, “Cut-Outs” encourages viewers to consider the values embedded in the images that surround them while exploring collage’s potential as a tool to frustrate reductive readings and simplistic narratives within popular imagery.

Janina Anderson says about this work:
The work also serves as an investigation into my own identity and the dislocation I’ve inherited. My parents are from two countries and my grandparents were from four. I grew up in a home where English, Spanish, and Guaraní cohabited single sentences.

Given my background, I’ve found myself both seduced and repelled by the uncomplicated world as presented by National Geographic. The Magazine’s mix of advertising, pop culture and pseudo-journalistic photography has, for its 130 year history, reduced the people it photographs from individuals to icons, meant to signify whole cultures, whose histories are rendered as flat as the magazine’s high gloss pages. Ironically, by removing information, I seek to retrieve nuance that National Geographic invariably flattens.

“Cut-Outs” uses collage to investigate how images construct meaning, while serving as a site for me and others to explore cross-cultural identity, multiculturalism and the displacement that compounds as borderlines are drawn and redrawn, migration patterns shift and swell over generations of assimilation and dislocation. The result is an immersive network of figures whose decontextualization seeks to complicate that which is and should remain complicated.

Hours:
Saturday, Noon-5PM
during events and by appointment