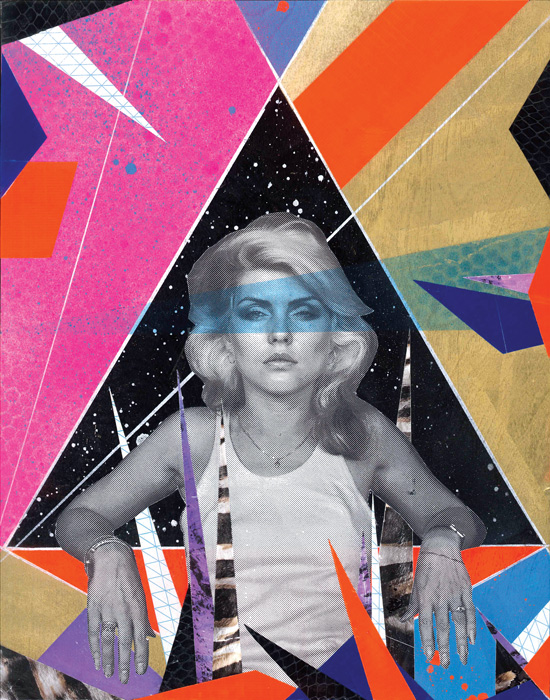 Curator Michael Ziobrowski said, “There is an endless amount of artists in the collage and tape art movements. For this exhibit, each artist was selected based on his or her unique style, approach, and ability to push the limits of the genre, while remaining grounded in the origins of cut and paste.”

The closing reception on Friday, 30 August 2013 (5-7PM) includes a raffle of original art + limited prints, on screen stop-motion collage works by featured artists, as well as the official screening of Stoopdown Films presentation, The Rants, directed by Federico Medina.

Justin Angelos was born in 1971 in Los Angeles, California. After spending many years on the road with a job in the tradeshow industry, Justin now lives in Burlingame, California where he is a full-time stay at home dad and artist.

Life, death, loss and rebirth play a major role in the forming of many of his ideas. Inspired by the current state of our world and the debris man leaves in his wake Justin’s palette is often made up of found and discarded objects collected in abandoned houses, vacant lots, roadsides and second hand stores. Primitive culture, the animal world and today’s fast paced and disposable society continue to add fuel to his work.

Michael Ziobrowski, aka JUNE22, was born in Chicago, Illinois, then transplanted to Orange County, California. With Polish immigrant parents, exhibiting an appreciation for art, music and good food, being creative has always come second nature.

Michael is a Father, Designer, Electronic Musician, Artist and Art Curator, with strong interest in Cosmology, HipHop Culture, Dutch Modernism, Contemporary Design and Fashion. Aerosol paint, Magazine clippings, Xerox copies, and a variety of adhesive tapes are mixed together to create his exploratory works of art. Michael has shown work primarily throughout Southern California for the past two plus years, both in group and solo exhibitions.

Growing up in Ohio amongst a fortress of trees and streams, Emily has always been easily inspired. After living there most of her life including time at Columbus College of Art and Design she was craving new insight and adventures. Volcom came along, swooped her from her nest and took Emily as their first Girls Graphic artist, a dream come true!

Emily loves to organize visual chaos. The Dada art movement is her inspiration, collage is her favourite medium. With Pantone papers, photos, fashion magazines, as well as old nature and science books as her paint, she manipulates them into an aesthetic understanding; marrying nature, humanity and colour, the things that inspire her the most.

“Tape is the Material, the Scissors are the Tool, the Cut is the Action. NO CURVES is the pseudonym under which hides one of the most well-known artist specialized in tape-art, i.e. the art of drawing with the adhesive tape: a product mainly employed as working material, becomes in the hands of the creative an extraordinary artistic element and a tool to investigate the man of the third millennium. Tape in his hands, he worked on posters on the street, customizing personalities of international advertising, thus creating a pop world made of fragmented lines that remind the graphics of the earliest video games, those characterized by 8-bit graphics.”

(adapted from the exhibition’s press materials)

Hours:
First Saturday of each month, 7-10PM
Other times by appointment