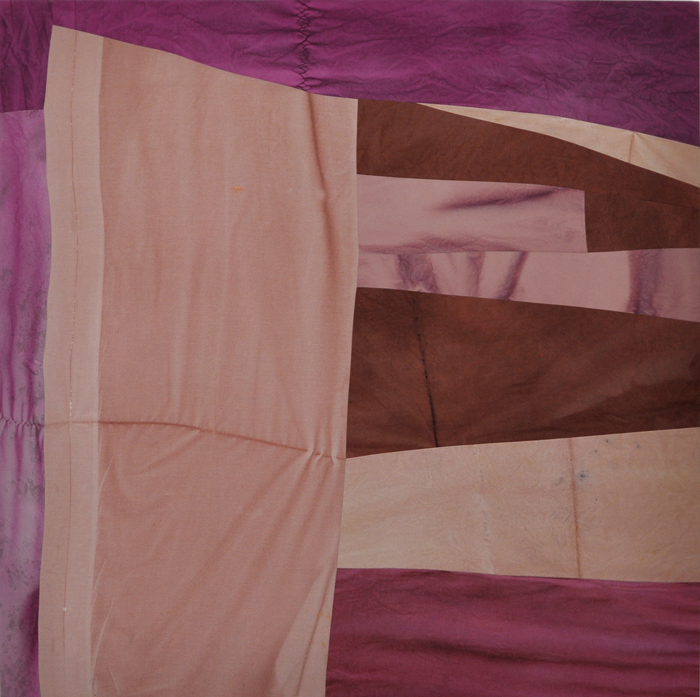 Moving away from the idea that the surface is merely something to be covered up by paint, the ink or dye in Heslin’s work suffuses the textile; in effect, the fabric becomes both support and surface. Concentrated experimentation with inks and dyes generates striking illusions of depth, folds and underlying shapes that are amplified by the stretching of the material over the frame. In this way, the hand-built stretcher and the surface material also become mutually constitutive elements.

As these materials and methods are intrinsic to Heslin’s practice, the works presented in “Ballads from the North Sea” mark a deeper investigation of form and composition. The strength of Heslin’s work derives from three major elements: a deep understanding of 20th century art—particularly late modernist abstract painting and the paradigmatic shifts that followed—a unique methodology, and openness to the aesthetic possibilities conferred by both. Heslin is informed by, but not beholden to, points of reference such as Clement Greenberg’s mid-century formalism and Rosalind Krauss’ discussions of medium in the postmodern shifts that followed. Significantly the artist has employed the limits proposed by these theorists as the activating agents of her creative process. The economy of means championed by Greenberg, for example, has been updated by Heslin’s dyeing process, as the most direct way to create a color field. Her use of second-hand and thrift store fabric speaks to another sense of economy, which by extension invokes the excesses of consumer culture.

As products of the artist’s own close attention and care, they ask us to “see the seams.” This exhortation carries a double signification: both as the thin borders between shapes that activate perceptual intensities, and the very possibilities of opening up onto new territory. Rather than a manifesto, these works are propositions for painting.

Colleen Heslin is a Vancouver and Montreal-based artist and independent curator. Heslin is a current MFA Candidate in Painting and Drawing at Concordia University and a recent winner of the 2013 RBC Painting Competition. With a BFA from Emily Carr University in Photography, Heslin’s work explores medium crossovers between painting, sculpture, fibres and photography. Founder of The Crying Room Projects, an independent project space, Heslin facilitates an ongoing public mural space for emerging artists in Vancouver. Her work and writing have been published and exhibited in Canada, USA, and Europe.