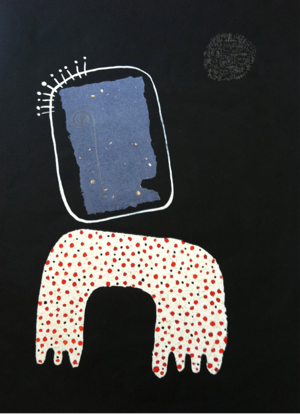 Victor Ekpuk’s collages are explorations in surface, texture and form. “Sometimes, when I approach the paper, I paste instead of draw.” In these whimsical compositions, Ekpuk incorporates his deft, hand-drawn lines into acts of tearing, layering, and assembling.

Nigerian-born artist Victor Ekpuk is best known for his improvisational use of nsibidi, a form of ideographic writing associated with Ekpe, the powerful, transethnic men’s association active in the southern border regions of Nigeria and Cameroon. As a student of fine arts at Obafemi Awolowo University in Ife in the mid-1980s, Ekpuk worked in a pedagogical environment informed by onaism, a Yorùbá aesthetic philosophy that urged students to explore the logics of pattern and design in indigenous African art forms. Ekpuk’s fascination with nsibidi during these years—its economy of line and encoded meanings—led to his broader explorations of drawing as writing, and to the invention of his own fluid letterforms. As a mature artist, Ekpuk has so internalized the rhythm and contours of his “script” that it flows from his hand like the outpouring of a personal archive.

In recent years, Ekpuk’s approach to mark making has come to flourish through his investigations of scale, motion, and form. “Auto-Graphics” features selections from several of Ekpuk’s new bodies of work, including collage, digital prints, and his supersized drawings—bold, vibrant, yet restrained compositions in which nsibidi signs are magnified, cropped, and glided beyond the picture plane. Their dense grounds of micro-script and bristling opaque forms contrast with the more figural works on view. Like nsibidi, which communicates through both visual mark and physical gesture, Ekpuk’s immersive drawings seem to be choreographed with the full force of his body.

Victor Ekpuk works across a range of media, including painting, printmaking, collage, sculpture, installation, and public art projects. He was also a political illustrator/cartoonist for the prominent Nigerian newspaper, The Daily News, before moving to the United States in 1999. Ekpuk has held numerous residencies at art institutions and universities throughout the United States and in Nigeria, the Netherlands, and France. His work has been collected by major institutions and has been featured in international exhibitions—including the upcoming Dak’art Biennale (Dakar, Senegal) in May 2014. Ekpuk currently lives and works in Washington, D.C.