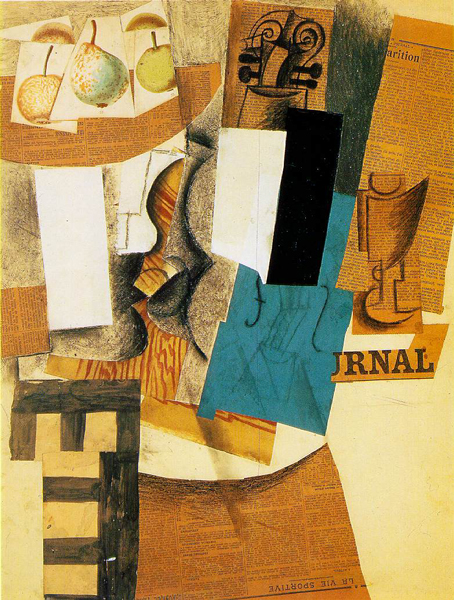 “In 1912 Georges Braque and Pablo Picasso created the first papiers collés by gluing pieces of oak-grained faux bois wallpaper onto their drawings,” writes Diane Waldman, deputy director of the Solomon R. Guggenheim Museum, in Collage, Assemblage, and the Found Object.

In 2012, we will mark the 100th anniversary of collage as a modern and contemporary art form. Or will we? Collage doesn’t seem to get a whole lot of respect in the art world. Collectors and curators look skeptically at the medium, concerned about its archival qualities. Critics often dismiss the medium because the use of found images violates some weird notions of authenticity. Many 20th century artists have dabbled (or more than dabbled) in collage: Hannah Höch, Kurt Schwitters, David Hockney, Damien Hirst, and Tom Wesselmann, to name a few.

In fact, a survey of recent exhibitions reveals collage is a staple of contemporary art.

Barbara Astman, whose exhibition “Daily Collage” recently closed at the Corkin Gallery, writes about her process, “Collage has continually been a part of my art practice in one form or another. This series developed out of my ongoing habit of reading the daily paper, as interested in the visual imagery as the newsworthy articles. There are obvious links between it and the 2006, Newspaper Series. I began saving images, which appeared in the daily papers, and would then collage selections onto pages in a small notebook. I was also thinking about Lenny Bruce and how his stand up comedy performances were like oral jazz with nothing censored, translated or mediated. I was not trying to create logical narratives nor was I commenting on the news of the day. I was just responding to the images in a very direct and impulsive way. This work is more about impulse and intuition; I let others create their own narratives from the resulting images.”

Kota Ezawa’s work is a bridge between paper collage and video. His paper cutout, Dead Troops Talk (2007), was described by Chinnie Ding in Artforum as “an intricate camouflage-like paper collage (war abstracted unto war-pattern) reformatting Jeff Wall’s 1992 photograph of the same title via computer drawing and 35-mm slide.” Curator Katherine Bussard of the Art Institute of Chicago said of Ezawa’s work, “In his paper cutouts, light boxes, and slides, only the essential shapes and colors remain, trumping all the details, shadows, and nuance that could be found in the original picture. Whether using collage technique or graphics software, Ezawa reconsiders the source image from a variety of perspectives.” Ezawa’s body of work represents an attempt to make sense of a century and a half of visual images by comparing, contrasting, and juxtaposing.

Canadian artist Elizabeth McIntosh works in collage on a large scale. At Goodwater Gallery in 2009 she covered an entire wall of the long, narrow space. At the Contemporary Art Gallery in Vancouver, she built two large-format collages: one wrapped the exterior of the gallery, using the window vitrines, and the other filled the Balkind Gallery in a unified form. “Her collages and paintings carry a similar language, one of solid planes, layered forms and bold colours. They inform each other, running in tandem, offering a visible language…,” explained the gallery.

Countless other recent examples of artists working in collage, exploring and developing the medium exist. In spite of this activity, there is a dearth of critical writing about the medium. In fact, Diane Waldman’s lively and thorough opus on the subject is out-of-print.

Artists make collage and people love collage because it speaks to the time we live in. It is no surprise that collage tends to peak during times when society is trying to figure itself out. Braque and Picasso were forging a new art, an art for the 20th century in the face of World War I. Richard Hamilton, Jasper Johns, and Robert Rauschenberg began exploring collage in the 1950’s, at a time when all sorts of writers, poets, and artists were creating the intellectual foundation of the 1960’s. Today, we live in a dramatically different world than we did ten years ago: We carry media in our pocket. We are constantly sharing images through social media. And entertainment has become increasingly dynamic and interactive through video games. Meanwhile, political and economic turbulence has become the norm.

Richard Hamilton’s iconic collage, Just what is it that makes today’s homes so different, so appealing?, came at a time when artists were discovering the visual language that became Pop art. Today, we see artists using collage to explore printmaking and photography. We see painters using the visual language of collage in their composition, using collage to make a new art. At a time when we are bombarded with images, collage becomes a means of processing those images, of figuring out what goes with what.

Contemporary collage since its beginning has been about collaboration. Jasper Johns and Robert Rauschenberg were working together in a manner similar to Braque and Picasso and inspired by the creative collaboration between choreographer Merce Cunningham and composer John Cage. Johns and Rauschenberg began an exploration of visual art.

Because collage is about mixing images, it lends itself to two or more people coming together. This is a highly contemporary act. The internet has made the world a more collaborative place. People work on documents in real time without having to be in the same country, much less the same room. One can record a guitar track in Paris, lay the drums and beats in Montreal, sing the lyrics in a Cairo recording studio and a producer in Los Angeles can assemble and mix the song. Duets are recorded without the two singers ever meeting.

The acts of juxtaposition, comparison, and contrast are integral to the process of collage; they are also how many people live today. The media has largely abandoned nuance in favor of presenting conflict. Internet memes like “Selleck Waterfall Sandwich,” smash together the famous moustached actor, with a picture of a waterfall and, usually, a giant sandwich. This is a form of collage in its most rudimentary form in the sense that those images that are successful not only contain the necessary elements, the elements are presented in such a manner that they please the viewer. Isn’t this what collage does?