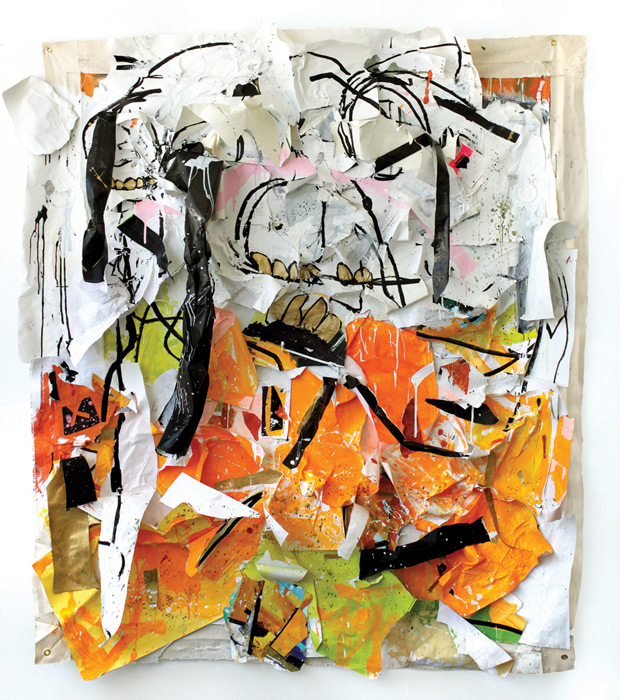 Houston’s McMurtrey Gallery presents abstract works by Texas artist Howard Sherman. His work references historical painting and the narrative cartoon. “Metaphysical Batman” introduces a three-dimensional element to Sherman’s paintings. Sherman’s paintings include elements of text, figure, illustrated line and think paint. In “Metaphysical Batman”, Sherman has taken individual works on paper, using acrylic and marker and collaged them on to large canvases. The title work, Metaphysical Batman, is 30-square-feet of collaged works in 3-D. The dominant colours are those of Batman, black and yellow. Howard Sherman has an MFA from the University of North Texas and he has participated in residencies across the U.S. Sherman’s works are in permanent collections, including those of the Art Museum of Southeast Texas, The Bank of Montreal, and Lone Star College of Houston.

This News and Notes item originally appeared in Issue Six. To see other News and Notes from the world of collage, SUBSCRIBE to Kolaj or PURCHASE ISSUE SIX.

Image:
Sportsmanship Is For Suckers
by Howard Sherman
85″x74″x8″
acrylic, marker, and acid-free paper on canvas
2013
Image courtesy of the artist and McMurtrey Gallery, Houston, Texas