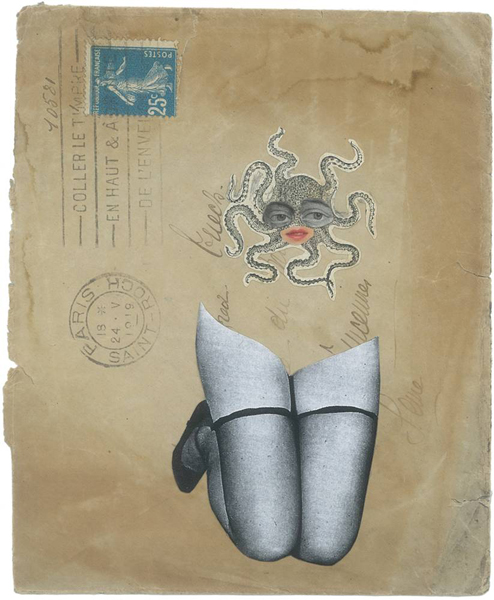 I first stumbled upon John Hundt’s collage work several years ago at a gallery in San Francisco. I’ve followed his career ever since and was lucky enough to include several of his works in an exhibit I curated earlier this year. Now, Portland, Oregon’s Ampersand Gallery and Fine Books, in collaboration with San Francisco’s Jack Fischer Gallery, has brought together a small sampling of the prolific artist’s collages in book form.

Implications-John Hundt is an 80-page, 7” x 5”, perfect bound, soft-cover catalogue published in an edition of 100. The book features 36 reproductions of the artist’s work, along with a brief foreword by Deirdre Madeleine Smith. For those unfamiliar with Hundt and his work, Smith’s essay provides a concise and informative introduction as well as a thoughtful, if a bit sparse, account of the visual motifs and themes that occur in the artist’s works.

While the book itself is petite and the reproductions about a third the size of the originals they depict, the printing is crisp on Mohawk Superfine paper, which gives the viewer a good sense of the original works’ colour, clarity and texture. The small scale and Ampersand’s minimal but elegant design create an intimate space for viewers to interact with the works. This encourages us to look closer than we might normally do, allowing us to see not only the composition as a whole but also to examine the unique and sophisticated dialogue between the individual elements of Hundt’s often witty juxtapositions.

Many of Hundt’s works are a clever combination of figurative, religious and mechanical imagery. These juxtapositions, which often feature vintage imagery of women’s stockinged legs, are some of the best of Hundt’s work and certainly the strongest in the book. They are at once humorous but also engaging on a level beyond a one-liner.

Hundt’s compositions provide us with a curious collection of imagery combined in such a way that we are required to engage our intellect in order to bring a sense of order to the whole. The apparent themes of sexuality and religion in the works, both of which could easily become obvious and juvenile in the hands of an artist of lesser skill, are handled with great aplomb by Hundt. The artist often combines these two loaded subjects without being crude, didactic or predictable. A good example of this is 5 Inch Global Valve. In this image, Hundt seamlessly combines a mechanical schematic, an image of the crucifixion and those ever-present female legs to create a new and unique entity that is both humorous and compelling beyond its individual parts. Hundt’s unique approach and eye for combinations that are both witty and challenging help the works transcend mere amusing illustration. They go beyond simple combinations of precious, nostalgic imagery to become clever compositions in which the viewer plays as much a part as the collagist in creating meaning from the image relationships.

If you have never experienced John Hundt’s work, this is a wonderful and affordable introduction. If you have, this is a fine collection to have on hand to examine often and closely. The book may be purchased for $25 (US) through Ampersand’s website: www.ampersandvintage.com.

This Book Review originally appeared in Issue Two. To see other Reviews from the world of collage, SUBSCRIBE to Kolaj or PURCHASE ISSUE TWO.