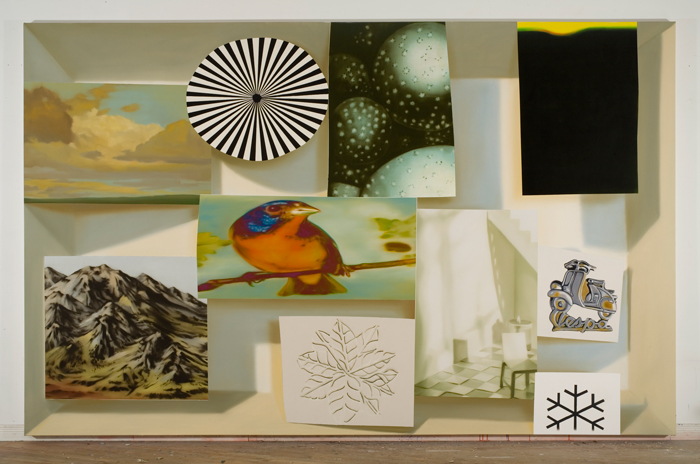 David Elliott is a painter, but his process crosses multiple mediums. He begins with collage. He selects his images and mounts them on a miniature stage to create a three-dimensional collage. Next, he photographs the collage, and finally he paints it to enlarge the image while maintaining the handmade aspect. The final product is a painting, but the subject matter and concept are formed in collage and translated through photography. In the collage steps of his process, he is making the object that he will try to convince the viewer of afterwards. It is not just about the initial creation: He uses photography as a second layer that both orients and disorients the viewer. Painting, as a third layer, allows for engagement and reflection.

ARIANE FAIRLIE: I’ve heard many collage artists say that collage is an intuitive process and helps them access their subconscious because it’s so immediate. Is this an appeal for you as well?

DAVID ELLIOTT: Yes. Even if you have some kind of thematic in mind before you begin, you never know what combinations will emerge. I purposely do not organize my imagery into “image bank files” with folders for various things (i.e., sky imagery, still life imagery, dogs, cats, male figures, female figures, etc.). During intense periods of working with collage, I begin to sort things into various piles, but when I am away from it for a while, I begin anew. I use large banker boxes of clippings and will often circulate them, so what I had rejected one month I will delve into the next. It keeps things fresh and surprising. It has always seemed to me like this method is reflective of life itself.

This article originally appeared in Issue Eleven. To read the entire article and other writing about the world of collage, SUBSCRIBE to Kolaj or PURCHASE ISSUE ELEVEN.