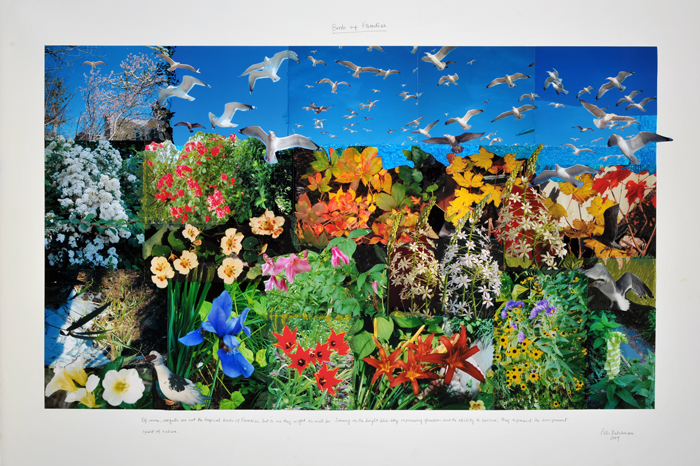 Freight + Volume Gallery presents a 50-year survey of the works of Peter Hutchinson in “The Logic of Mountains” (7 March-13 April 2013). A collection of collages, books, films and various constructions, the exhibit showcases the eccentric artist’s bold use of colour, texts and shapes through his myriad of work over the course of 50 years.

To understand the artist’s work is to understand the 83-year-old British-born artist himself. Having been a personal friend of Hutchinson for more than 20 years now, Freight+Volume owner and director Nick Lawrence is quite familiar with the artist’s humourous and eccentric ways and gives us a personal perspective. Referring to him as a “true renaissance man,” he says “to know Peter is to be constantly astounded, enriched and educated by him.”

Known simply as the “grandfather of narrative art” to some, Hutchinson’s work not only tells us stories, but allows viewers to travel to different places and seasons. In an aptly named piece, Inharmonious Seasons, he harmoniously presents mountains draped in snow with flowers in full bloom. In Empty Mountains-Crowded Sea, Hutchinson pulls our eyes between two contrasting, yet beautiful views of nature. The simplicity of objects such as sticks and ropes create artwork in other pieces. The use of such mundane and drab things accentuates Hutchinson’s ability to see beyond what is merely presented, his ability to create something ambiguous.

One can get lost in time studying the intricacies and dichotomies he presents in his work. “The Logic of Mountains” exhibit takes the viewer through a colourful and conceptual journey that allows us to glimpse into the imagination of Peter Hutchinson, an imagination that stretches beyond mountains and the very idea of logic itself.

This Exhibition Review originally appeared in Issue Four. To learn more about the world of collage, SUBSCRIBE to Kolaj or PURCHASE ISSUE FOUR.

Hours:
Tuesday-Saturday, 11AM-6PM
and by appointment

Image:
Birds of Paradise
by Peter Hutchinson
40″x60″
photo collage with text
2009
Courtesy of Freight+Volume and the artist