a higher education at Pittsburg State 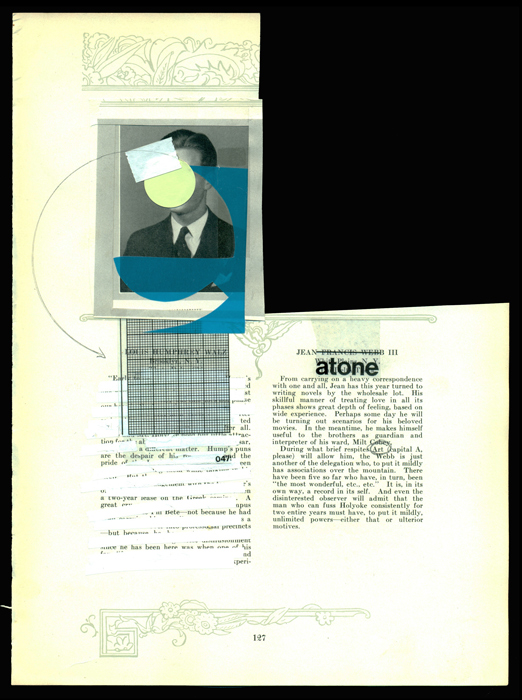 Cory Peeke’s artworks are a fluid assemblage of society’s visual debris that, through the layering of tape and glue, allow the viewer to have a new experience with a past reflection. Through the process of collage, these snippets of the past combine to become something both fresh and familiar. Peeke’s most recent works explore the duality that is the transient, disposable nature of culture, as well as the need to create tradition and cultural continuity through the lens of the book and higher education.

Peeke said, “I’m a collage maker for much the same reason I’m a curator–I love images. This affection has led me to collect remnant imagery; the largely ignored and seemingly inconsequential bits of ephemera that once had a purpose, still have a presence, but now idle in disuse. I combine, layer, juxtapose, glue, tape and re-contextualize these bits and pieces of detritus in order to reincarnate and recharge them.”

Cory W. Peeke received his BFA in Fine Arts from Kendall College of Art and Design and his MFA from the University of Idaho. He has exhibited his work in numerous solo and group exhibits throughout the U.S. as well as Europe and South America. His work has been published in Mein schwules Auge 8 (2011) and Mein schwules Auge 11 (2014) (konkursbuch, Tübingen, Germany) as well as in L’art du collage au Coeur de la creation (Éditions P.J. Varet, 2014, Plémet, France), Creative Quarterly, and The Artist Catalogue among other publications. His works are included in the permanent collections of Eastern Oregon University, Lockhaven University, Whitman College and the International Museum of Collage, Assemblage and Construction. In addition to his studio practice, he is a contributing writer for Kolaj. Cory serves as the Director of the Nightingale Gallery and Professor of Art at Eastern Oregon University in La Grande, Oregon. He is represented by Gallery I M A in Seattle, Washington.