“There Are Women at the Gates Seeking a New World”: Elektra KB at BravinLee programs 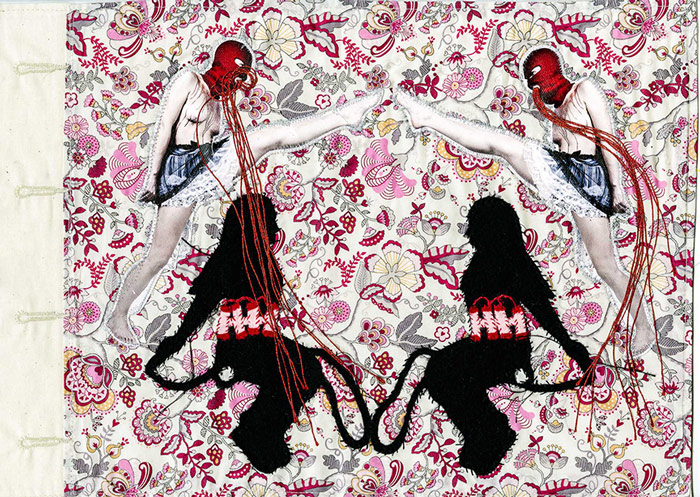 Elektra KB: “There Are Women at the Gates Seeking a New World”

Elektra KB presents new works on paper, photography, and a selection of cloth pages of her 20 page, hand-sewn artist’s book.

The pages of the book, each a sewn and embroidered felt collage, depict guerilla warfare in a mythological, semi-autobiographical world parallel to ours: a female rebel army revolting against the forces of a tyrannical police state. The women are primitivist and often uniformed and weaponized–most wear only short petticoats and veils or ominous balaklava. They pose brazenly with machine guns and chainsaws in photo ops, but Elektra KB has rendered these weapons more like toys, and according to her rule-set for this alternative world, they shoot rays of light not ammo.

As in Anthony Burgess’ A Clockwork Orange, Elektra KB’s world subsists on a complex play of invented language and iconography; however, her protagonists are righteous. “The Cathara Insurgent Women”—dancing warriors, rebels, heretics—fight against the shadowy forces of “The Theocratic Republic of Gaia”. The Insurgents call to mind simultaneously today’s feminists and activists like Susana Chavez, Medieval heretics, and the Aztecs in the era of Spanish conquest.

Throughout the pages of the book, shadows leak and flow together representing the forces of Neo-colonization: mass scale and conspiratorial violence and murder, repression of free speech, and the oppression and alienation of women. Threads hang loosely from these shadows and war iconography, representing catharsis, repression, Barbarism, and physical emancipation à la Freud’s Death Drive.

The title of the show is a modification of text, “There are men at the gates seeking a new world,” extracted from an essay in the first issue of a magazine produced by the late 1960s art group Black Mask (later Up Against the Wall Motherfuckers). The group, formed by painter Ben Morea and poet Dan Georgakas, declared that revolutionary art should be an integral part of life, as in primitive society, and not an appendage to wealth.

Elektra KB is a graduate of the School of Visual Arts (2012). In 2013, her work has been presented around New York in both group and solo shows. A monograph of her work published by Tangled Wilderness/Combustion Books is due in late spring 2013.

← Guillaume Vallée
“Remix: Selections from the International Collage Center” at the Katonah Museum of Art →