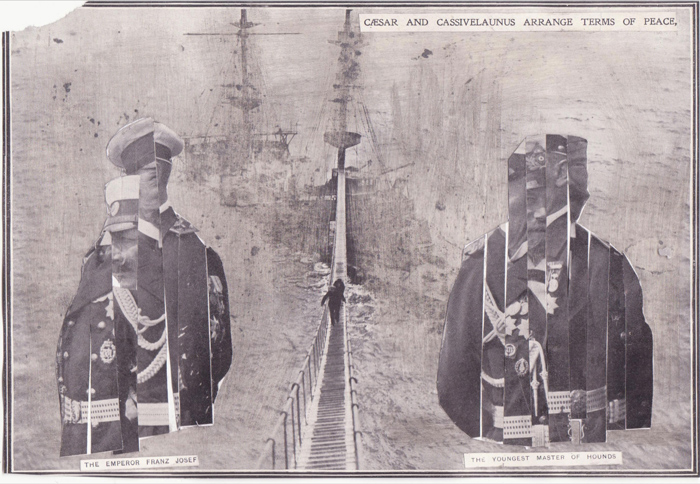 Guillaume Vallée is a graduate of the film animation program at Concordia University in Montreal. Vallée is interested in radical forms of animation and analogue techniques as a way of considering the direct interaction between different mediums. His work is an exploration of materiality within the creative process. He is currently pursuing a Master’s degree in Studio Arts with a film production option at Concordia. You can find out more at his website.

His artworks depict systems of hierarchy and monarchy in particular, power struggles, war, and politics. The interactions between the people who reside within his collaged domain are from a distant era, but their problems are ours, and possibly forever doomed to be repeated.

To read more about Guillaume Vallée, purchase Issue Four or SUBSCRIBE to never miss an issue.

Image:
Caesar and Cassivelaunus Arrange Terms of Peace
by Guillaume Vallée
17″x24″
digital print of a collage on paper
2012

← Étienne Gélinas at Galerie St-Laurent + Hill
“There Are Women at the Gates Seeking a New World”: Elektra KB at BravinLee programs →