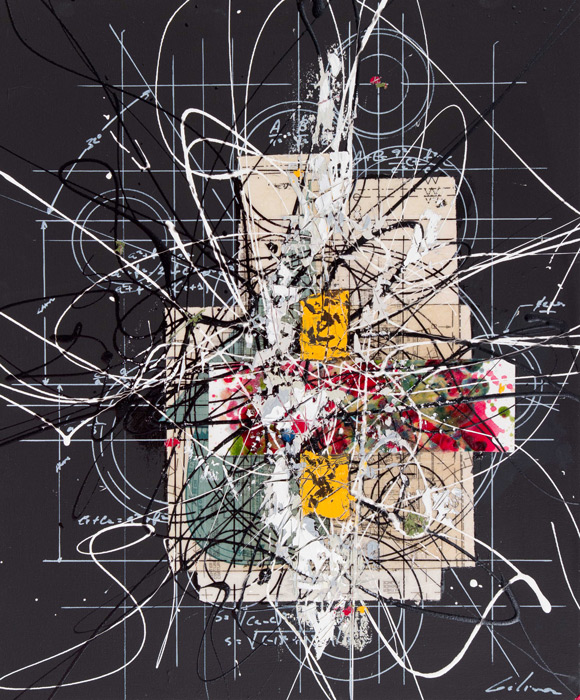 Étienne Gélinas calls his work painting, but the work on view at Galerie St-Laurent + Hill in Ottawa has clear collage elements, including sewing patterns, photos of gearing systems, architectural plans, anatomy drawings, and a form of technical drawing involving engraving in paste. As Gélinas says, “These items model and standardize the world around us. In my work, I insert them in a pictorial universe that is born out of providence. The slides, the dripping, the texture and the more random incisions reinforce the opposition with the rigid and precise universe of geometric codes. One can also note an element reminiscent of native art: solid colour backgrounds, and a fine line between figurative and abstract, that are however approached within a more contemporary context.

My research in painting is based on the opposition of different codes: I strive to make the pictorial and scientific worlds coexist in a single space.

The standardisation of humankind’s living space and style particularly reflected in contemporary architecture, are subjects that fascinate me. These concepts are directly opposed to the valorization of individualism in our society, illustrating in my view, an undeniable paradox.

The notion of space is central to my approach – it presents itself abstractly through the separation of planes that creates depth in the painting. This depth is accentuated by the network of converging lines that bring us back to the representation of vanishing points and horizon lines. The circle contributes to the notion of space and depth by offering, through perspective, a tunnel effect. The circle within the circle becomes a symbol of clans, targets and objectives, but even more so a symbol of perfection – engraved, encrusted, even scarified in an imperfect world.

The intensity of the iconography that emerges from the mathematical formulae and geometric shapes accentuates the ambiguity between the different levels of planes in my paintings. This confrontation of codes amplifies the emotional impact of the painting and transforms these heterogeneous elements into visual poetry. My work consists in testing the expressiveness of the symbiosis of these two codes, the pictorial and the scientific, while placed within a common universe.”

Born in Maniwaki, Quebec, Canada, Etienne Gélinas pursued college education in “visual and media arts” at the Collège de l’Outaouais in Gatineau, Québec, followed by a Bachelor’s degree in art and design from the Université du Québec en Outaouais (UQO) in 2006, and later graduated with a master’s degree in project management from the Faculty of Administration of the UQO in 2012. His work in painting and sculpture has been shown widely in the Ottawa-Gatineau region and in Toronto.