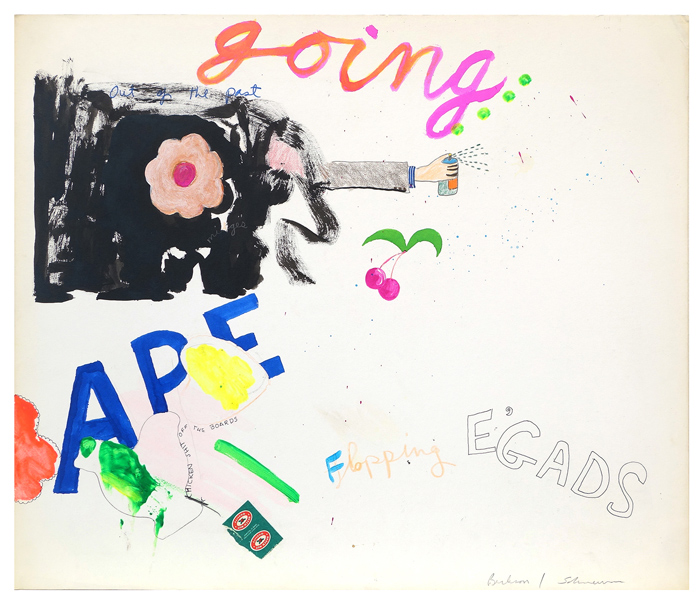 “Going Ape” highlights the spontaneous play between images and words that George Schneeman’s collaborative style fostered in his life and work, focusing on a series of paintings the artist made with poet Bill Berkson (1939-2016). Schneeman (1934-2009) was a painter, collagist, and ceramicist.

In one such collaboration with Berkson, an arm with a spray can emerges from a central black mass adorned with a peach flower, the words “going” and “ape” scrolled above and below in fluorescent paint. Phrases such as “out of the past” and “chicken shit off the boards” are interwoven across the paper between small pictures and streaks of similar vibrant colors. The work is as harmonious as it is unsettling. In his essay included in the book Painter Among Poets: The Collaborative Art of George Schneeman, edited by Ron Padgett (Granary Books, 2004), Berkson wrote:

“My sense is that our collaborations proceeded, with participants sometimes as numerous as three or four at time, as if in a trance. The trance tended to favor the momentary punster—or at any rate one who will take the lid off word or phrase and transcribe the static-y emanations that accrue. Verbal doodling indulged, it fell to George to unify the often contentious elements.” 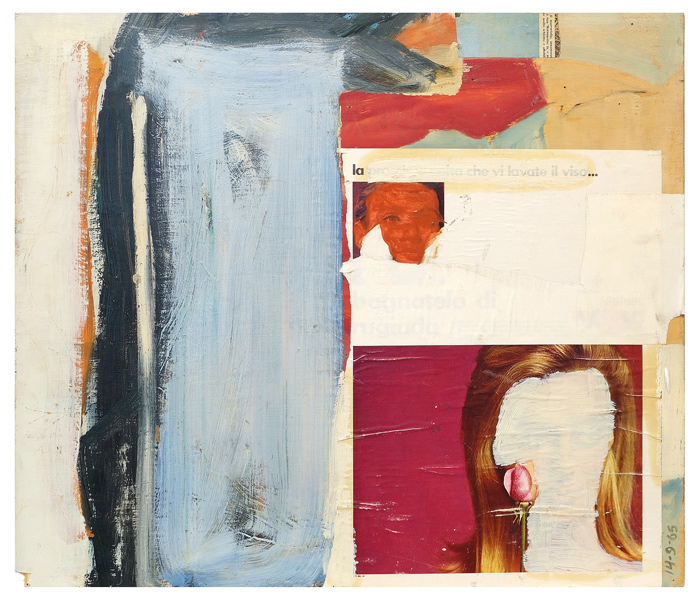 Collaborating since the mid-1960s with numerous poets and writers, including Peter Schjeldahl, Ron Padgett and Anne Waldman, Schneeman also painted on canvas, made frescos and in the 1980s began working with ceramics; often painting portraits of the circle of poets and friends centered around the Poetry Project at St. Mark’s Church in-the-Bowery. Schneeman’s ceramics, also on view, incorporate the same playful portraiture and off-the-cuff nature as the rest of his oeuvre. The works in the exhibition draw from Pop Art and its fundamental connection to language, one of Schneeman’s major influences.

George Schneeman’s work has been exhibited since the late 1960s, with solo exhibitions at Holly Solomon Gallery, New York, the CUE Art Foundation, New York, Tibor de Nagy Gallery, New York, the Istituto Italiano di Cultura, San Francisco and most recently Poets House, New York. His work is in numerous private and public collections, including the Achenbach Foundation, Fine Arts Museum of San Francisco, the National Portrait Gallery, Smithsonian Institution, Washington, D.C., the Museum of Modern Art, New York, the Minneapolis Institute of Art, the American Academy of Arts and Letters, New York and UC Berkeley Art Museum, California. He received numerous grants, including the Rosenthal Award from the American Academy of Arts and Letters, the National Endowment for the Arts and the Fund for Poetry grant for his collaborations with poets. This is the second solo exhibition of Schneeman’s work at Pavel Zoubok Gallery.

← You Are Here NYC
The Art of Collage & Assemblage →