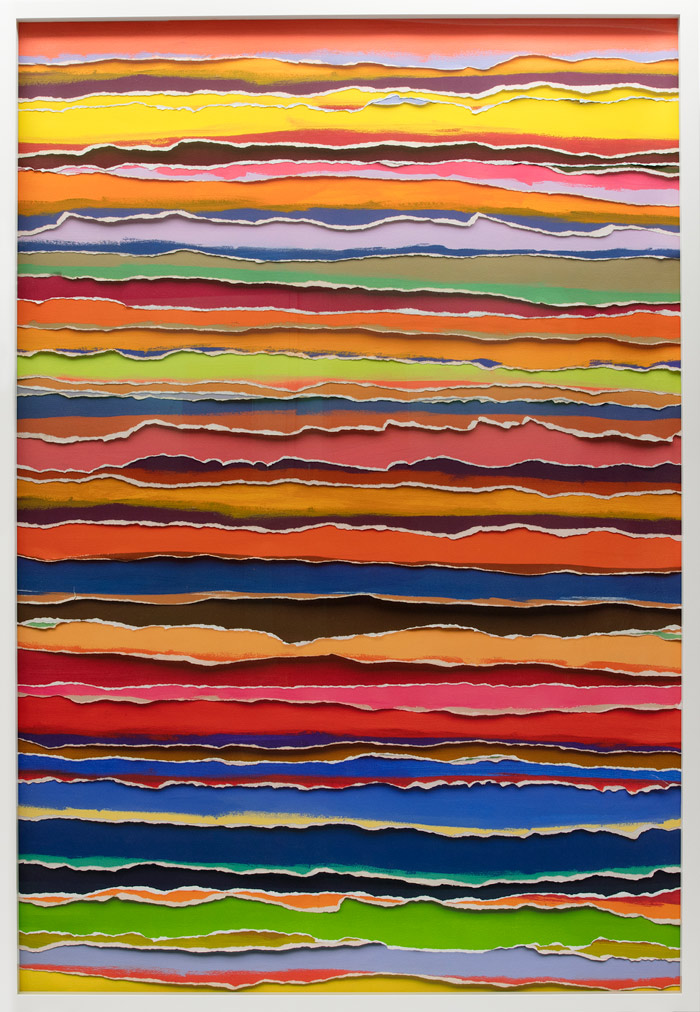 Vik Muniz’s work occupies a curious position in contemporary art. On the one hand, it is driven by an unflagging analytic inquiry–part phenomenological, part semiotic, part socio-cultural–into the juncture of representation, perception and cognition that we call works of art. And yet this same inquiry is enacted by Muniz within the production of images and objects that are themselves so deftly and delightfully executed within the common visual languages of our time that they can be (and indeed often are) appreciated entirely independent of the discourse that shaped them. Theory and practice are so fully integrated into each other that they occupy the same metaphorical space at the same time, each fully embodying the other.

“Handmade” consists of a series of works in which Muniz combines physical objects and photographic images, often juxtaposing or overlaying the two so as to create hybrid, image-objects that blur the line between material presence and representational reproduction — in other words, between “real” and “represented”. In stylistic terms, most of the images reference various strands of 20th-century abstraction, although without the direct quotation of iconic works that has been a signature of Muniz’s in the past. Their execution is meticulous while tending toward the low-tech: strips of twine are overlaid onto a photograph of strips of twine, the two coming together to form an intricately tessellated pattern; colored snippets of paper and a photograph of colored snippets of paper meld together seamlessly into a similarly colorful whole; circles of felt and a photograph of circles of felt occupy the same layered yet uninterrupted visual plane.

On the formal level, the works in “Handmade” seem to diverge from the singular methodology for which Muniz is best known, and in this regard they usher in a new chapter in the Brazilian artist’s production. For example, unlike in the past, there is no deciphering of the coded representational message, there are no narrative strategies employed, there are no recognition or identification games. In addition, unlike in past work, here there is no reverence for the photographic surface, which has been freely intervened into and interfered with, yielding unique, hand-crafted, semi-sculptural mixed-media objects. But this divergence is in fact only partial, for “Handmade” at the same time maintains the fundamental concerns that have always driven Muniz’s artistic practice. Simply put, in these works visual language is juxtaposed with visual reality, representation is combined with presence, signifier is joined to signified. And as in any such juxtaposition, the deeper focus is on the “space in between” or “interface” between the two–just as all forms of language (art included) entail a symbolic “interface” on the cognitive level. In this sense, while marking an important turn in Muniz’s formal strategy, the works in Handmade also belong squarely to his ongoing inquiry into visual communication, artistic expression and, ultimately, lived experience.

(adapted from the gallery’s press materials, written by George Stolz)

← Pero Primero Bailamos
The Course of an Empire →