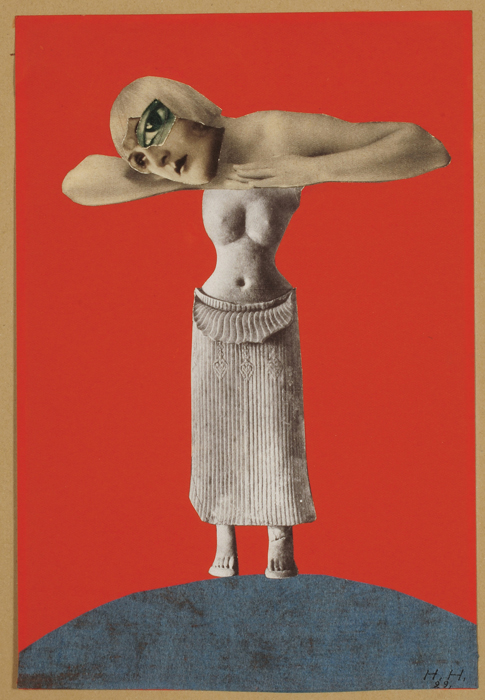 Hannah Höch was an important member of the Berlin Dada movement and a pioneer in collage. Splicing together images taken from popular magazines, illustrated journals and fashion publications, she created a humorous and moving commentary on society during a time of tremendous social change. Acerbic, astute and funny, Höch established collage as a key medium for satire whilst being a master of its poetic beauty.

Höch created some of the most radical works of the time and was admired by contemporaries such as George Grosz, Theo van Doesburg and Kurt Schwitters, yet she was often overlooked by traditional art history. At a time when her work has never seemed more relevant, the exhibition puts this inspiring figure in the spotlight.

Bringing together over 100 works from major international collections, the exhibition includes collages, photomontages, watercolours and woodcuts, spanning six decades from the 1910s to the 1970s.

This exhibition charts Höch’s career beginning with early works influenced by her time working in the fashion industry to key photomontages from her Dada period, which sees notable figures collaged together with emblems of industry in a critique of the relationship between financiers and the military at the height of an economic crisis in Europe.

Höch explored the concept of the “New Woman” in Weimar Germany, presenting complex discussions around gender and identity in a series of both biting and poignant collages. The exhibition includes a number of works from the series “From an Ethnographic Museum”, in which Höch combines images of female bodies with traditional masks and objects and layers of block colours, capturing the style of the 1920s avant-garde theatre and fashion. (image above)

Höch remained in Germany during World War II and retreated to a house just outside Berlin. Entering a period of lyrical abstraction that explores the materials and possibilities of a newly developing consumer culture, the exhibition includes her later works which joyously makes use of cut-outs from colour-print and popular culture, incorporating red lips, petticoats and crystals.

← The Collaboration of Commissions
“Return to Splendour” at Marylebone Gardens, London →