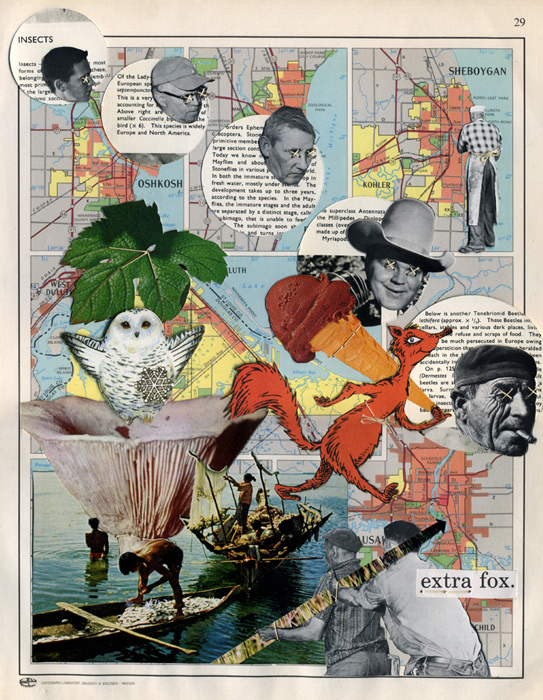 “Collage is the medium for cheapskates and dumpster divers. We’re thrifty. We don’t need any new stuff. We’re reusers and recyclers. We are the alchemists. We turn lemons into lemonade,” Mister Koppa says. With a limited library of material, he states his mission as an artist is to clean house and organize whatever collage material he has accumulated in his 46 years on the planet. His goal: Turn it all into art. “I want it all gone before I’m done. I want to die with nothing,” he claims.

Koppa has recently enjoyed collaborating with other collage artists he met through Facebook (though he has since deactivated his account). As the proprietor of The Heavy Duty Press, he has published a few books within the last two years documenting his adventures. Thawt, a 212-page, limited edition hardcover, is the story of an international collaboration that began with a whim on a 0° mid-February day, and wrapped up 60 days later with contributions from eleven other artists around the world. Monster Trust is a 40-page, pamphlet-stitched limited edition, showcasing 3-way collaborative efforts between Koppa, Zach Collins (We Said Hello and Shook Hands), and eight other North American collagists (reviewed in Kolaj #12).

Mister Mike Koppa is a self-employed stonecutter, responsible for adding roughly 750 death dates annually to cemetery stones throughout the driftless region of southwestern Wisconsin. While his occupation is rarely referenced directly in his artwork, his acute awareness of the passing of time, human mortality, and the abundance of plastic flowers in the world has had an unmistakable influence on his approach to art.