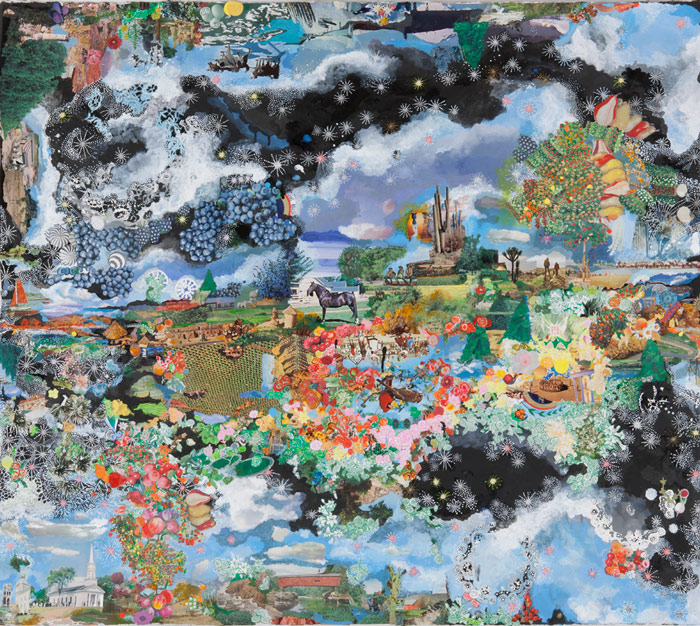 Sally Gil’s “Out of This World” is her first exhibition in her native state of Vermont. The artist created a site-specific installation directly on the gallery walls and three large-scale works and a number of smaller-scale works complete the show.

“Sally Gil’s technicolor utopias draw the viewer into complex worlds where iconic fragments taken from a variety of found print materials (discarded encyclopedias, seed catalogues, post cards) form new narratives with ephemera from daily life (tea wrappers, paper from florists, doilies). Her stream of consciousness sweeps us up with effervescent energy. Seen from afar, there is a sense of the cosmos, the Big Bang, star dust. Close up, thoughtfully juxtaposed elements create new links, alternate stories. Choosing to paint over, embellish, or riff off these elements she fully appropriates the found imagery. More perfect truths are born.” states Sophie Brechu-West, founder of 571 Projects and curator of this exhibition. 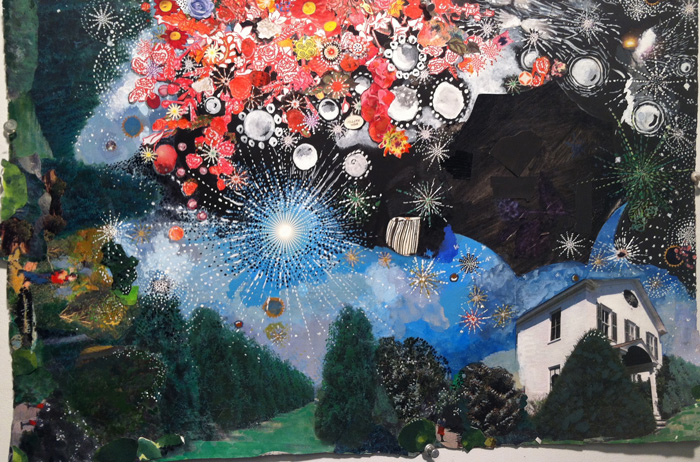 Gil’s process is meticulous, using visual and word association to construct possible alternate worlds. At times a kind of nostalgia bubbles to the surface, and while the works are not intended to be primarily autobiographical documents, each holds the indelible marks of the maker and the things that hold meaning for her. In Indigenous Mass, the image of a Morgan horse at the centre of the piece stands under a blueberry sky: the state animal of Vermont and a berry that grows wild in the state. Each fragment holds a wealth of signifiers. Personal and universal, Gil’s work is generous: it allows each viewer a way in.

Brooklyn-based Sally Gil was born and raised in Bennington, Vermont. She received her BA from the University of California, San Diego and her MFA from Hunter College, City University of New York. She has had solo and group exhibitions in Manhattan and Brooklyn, and Charlotte, North Carolina. The artist was a Fellow at Apexart (2013) to Sao Paolo, Brazil, and a Visiting Artist at The University of North Carolina, Charlotte (2010) and the University of Tennessee at Knoxville (2001). Her work is included in the U.S. State Department’s Arts in Embassies program in Brazzaville, Congo (2014-2016).

(adapted from the exhibition press materials)