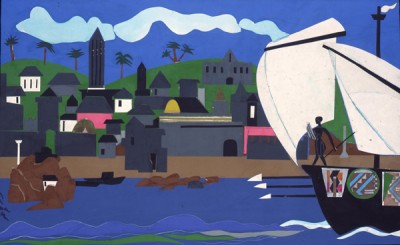 In 1977, Romare Bearden (1911–1988), one of the most powerful and original artists of the 20th century, created a cycle of collages and watercolours based on Homer’s epic poem, The Odyssey. Rich in symbolism and allegorical content, Bearden’s “Odysseus Series” created an artistic bridge between classical mythology and African American culture. The works conveyed a sense of timelessness and the universality of the human condition, but their brilliance was displayed for only two months in New York City before being scattered to private collections and public art museums.

This new exhibition organized by the Smithsonian features nearly 50 Bearden works, including all but three of the original collages from the “Odysseus Series”, watercolors and line drawings relating to his interest in classical themes.

“Romare Bearden: A Black Odyssey” continues on a seven-city national tour through 2014.

← How Collage Helped Bring Modernity to Venezuela
What Is It About the Patina of Age?
by Cory W. Peeke →