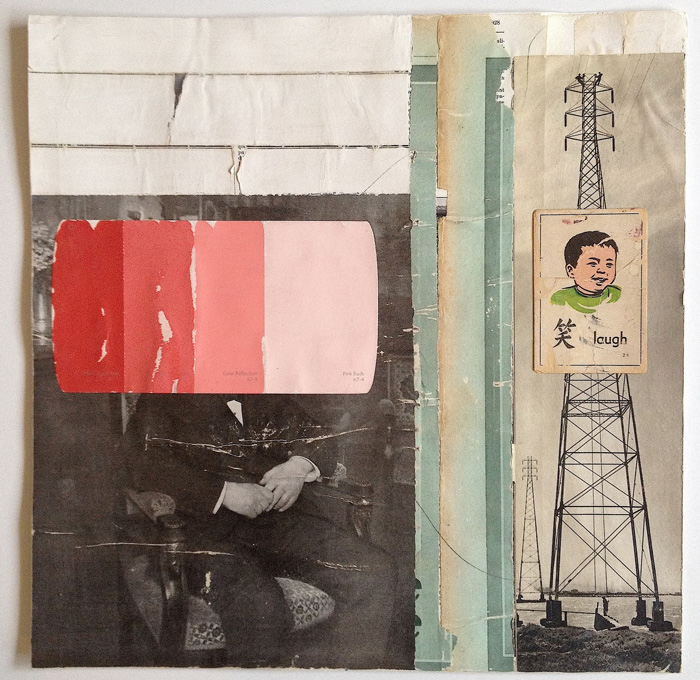 “(Theological) Jambles” is a 15-piece suite of collage-on-paper works by American artist Matthew Rose that concerns the notion of technology as spiritual deliverance. They are on view for the first time at The Observer Building in Hastings, England for the “1067 mind invasion”, a major British survey of contemporary collage.

“The ‘(Theological) Jambles’ collages load up the square with an edge-to-edge telescopic survey of the last century. Why, then, (Theological)? Because in our world technology (and rationality) began to supplant religion, or at least compete with it, at the onset of the 20th century. The works also discourse on a manner of working in layers–think Johns, Rauschenberg, Ray Johnson–serving as an analogue essay on the rise of our current digital dreamscape. Each work measures 15 x 15 inches square, is signed and dated 2015, and rubber-stamped twice on the back.”

Born in 1959 in New York, Matthew Rose earned his BA from Brown University in Linguistics/Semiotics. A pair of books and complementary exhibitions are currently in the works: Suicide Specials and Weekend Plans. From time to time, the artist will also amuse people with his mandolin compositions.