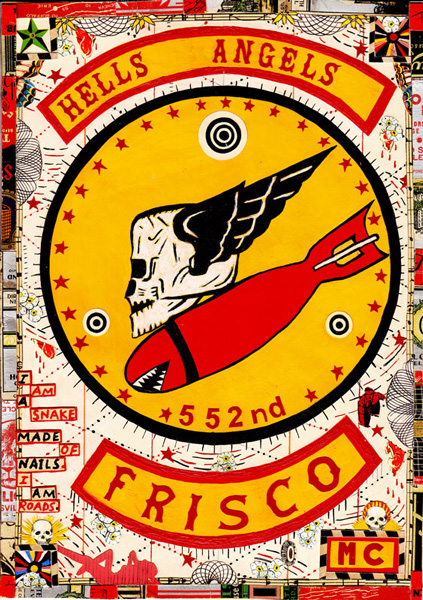 Tony Fitzpatrick: “The Other Kind”

Tony Fitzpatrick is a passionate storyteller conveying his tales across multiple media: as a playwright, a stage and film performer, a radio personality, and as a visual artist through his drawing collages and etchings. “The Other Kind” is Fitzpatrick’s fifth solo show at Pierogi.

Fitzpatrick crafts each of these relatively small works to hold a world of information: his poetic take on a local legend, a historical figure, a bird, or insect of fascination to him. Subjects include the Trail of Tears and the stories of American Indian tribes, his hero Crazy Horse, his fascination with the cities of Chicago and New Orleans and the state of Ohio, and baseball, as well as the more colourful side of life.

Much of the work in this exhibition developed out of Fitzpatrick’s interest in biker clubs which embody a notion of the free spirit and the nonconformist backbone of independence. Fitzpatrick said, “Central to all the motorcycle clubs…is the idea of the motorcycle as an instrument of freedom. It is the binding object and metaphor—fast, dangerous, and eternal. Like I said. . .it’s why cowboys got off horses.”

The motorcycle clubs channel the pure rebellious side of human nature. The Black Knights, Yellow Jackets, Stoned Riders, and Black Widows are only a few of the clubs represented in the drawings included in this exhibition. A second group of drawings is focused on moths, a more delicate love of the artist. Fitzpatrick said, “I tend to return to moths from time to time as a subject, particularly when describing a place. They are so much part of my childhood—the big, beautiful buckeye moths that used to scare me as a kid, . .the tiny, white powdery ghost moths that seemed so ephemeral and fleeting. In the autumn, I’d find them dead on the widow sill from the season’s first freeze and I would be reminded that every still thing is the mirror of another, and also of the Unamuno quote that states, ‘We die of cold and not of darkness.'”

Fitzpatrick’s work has been featured in group and solo exhibitions in New Orleans, New York, and Chicago. His work is in the permanent collections of the Museum of Modern Art (New York), the Museum of Contemporary Art (Chicago), and the National Museum of American Art (Washington, DC). He lives and works in Chicago.

Hours:
Tuesday-Sunday, 11AM-6PM or by appointment