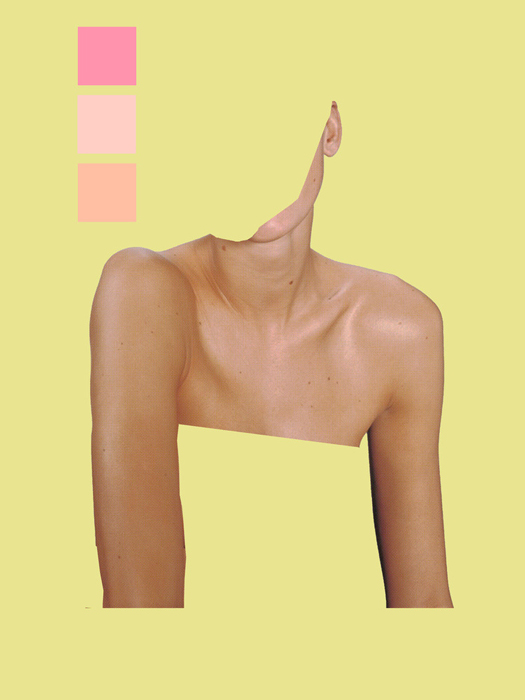 “UNCARNATE” is a response to the pervasive yet evanescent language of bodily representation in contemporary consumer culture. The appropriated images and objects exhibited borrow a fractitious visual rhetoric evident in glamorous advertisements and store display systems. Evan Isoline interrupts, re-signifies, and transposes these idyllic representations into physical substrates highlighting a contrast between the natural and artificial morphologies of the body. “UNCARNATE” describes a body that is trapped between dimensions, lost in a forest of surfaces, fragmented, eclipsed, backwards, inverted, and inside out. His work investigates the potential for a vital and performative mediation within the semiotic dimension of pop-consumer culture, seeking to create disorder within the provisional and material preoccupations that separate revelation from matter, and sensuality from visual experience.

Isoline says about “UNCARNATE”: “I plan the images in show to be about 50% male and 50% female. That is one thing that is interesting about using appropriated fashion images. That’s mainly what it is in mainstream media. There are other genders represented in certain areas, but my show will work toward an ambiguity.”

(text adapted from materials provided by the gallery)

Hours:
Monday-Friday, 9AM-5PM
and by appointment