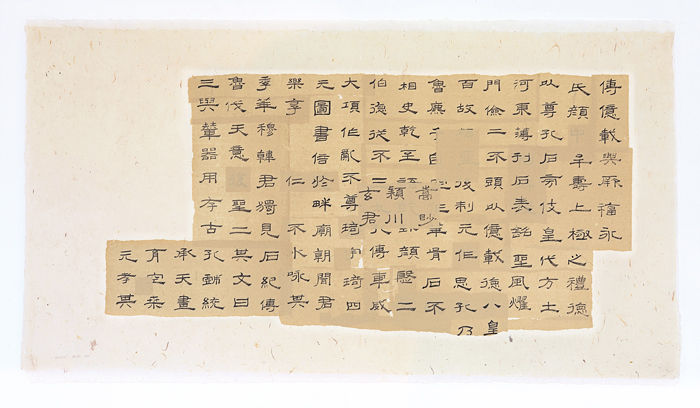 “Cursive Script, Color, and Collage: The Art of Wei Jia”

“Cursive Script, Color, and Collage: The Art of Wei Jia” is a solo exhibition of 14 paintings and works on paper, including 5 new mixed-media works being shown for the first time.

Wei Jia’s practice seeks to reconcile the challenges of uniting Eastern and Western influences, drawing equally from his formal training in realism at the Central Academy of Fine Arts, Beijing as well as his graduate painting studies at Bloomsburg University, Pennsylvania. The artist’s on-going study of calligraphy, a love for poetry of the Tang and Sung Dynasty, and a deep reverence for nature also informs his paintings greatly. His Eastern and Western methods of painting and collage, which routinely make use of both ink as well as gouache, and his use of a wide variety of other materials illustrate the totality and complexity of his attempt to integrate the disparate traditions that inform his life and education as an artist.

Wei Jia was born in 1957 in Beijing. He graduated with a BFA from the Central Academy of Fine Arts in Beijing (1984) and received his MFA. from Bloomsburg University of Pennsylvania (1987). Currently he works and lives between New York and Beijing, where he teaches at the Central Academy of Fine Arts. Wei has had numerous solo and group exhibitions in various venues in the United States and China.

← One Plus One Became Three
Daily Operation →