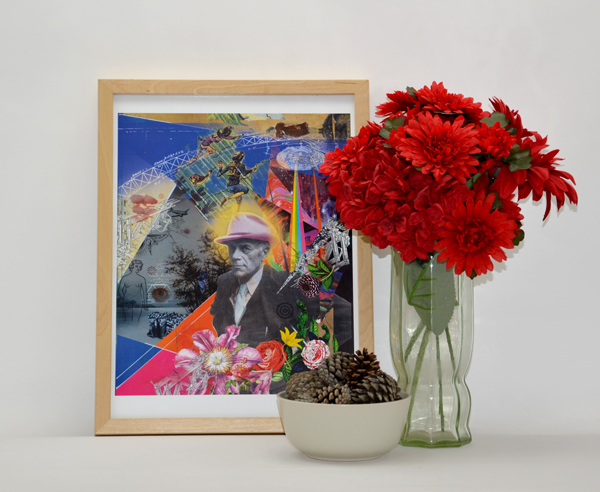 The cover of Issue 7 of Kolaj Magazine is the result of a collaboration among seven artists: Allan Bealy, Michael Ziobrowski, Steven Specht, Michael Waraksa, Lita Kenyon, Amanda Fasken, Danielle Garza. An homage to Georges Braque, the cover celebrates the essential work of the collage artist: to use fragments, to establish space and movement, to get us closer to the subject, the poetry of our world.

As collaboration emerged as a theme for this issue of Kolaj Magazine, it seemed appropriate that the cover of the issue also be a collaborative effort. To select collaborators, we posted a call on our website and Facebook page that asked potential collaborators to “get in line” by sending us an email. Then, Kolaj editor Benoit Depelteau sent each person in line a Photoshop file and asked them to add to it and send it back. Each time this missive left, we waited with anticipation for its return. And each time the file came back, a new, delightful portion of the image emerged.

All the artists were recruited to collaborate on a print that would also be used as the cover of Kolaj Magazine #7. Kolaj editor Benoit Depelteau coordinated the effort. The image crisscrossed North America as artists added to the work. Southern California-based Michael Ziobrowski went first. Ziobrowski’s goal with a making a collage is to make the viewer “feel the same freedom in viewing it, as I felt in creating it.” His intent was “to show as much of my style as possible, but keeping in mind that I would be sharing space with other artists, and be on the bottom of the pile,” wrote Ziobrowski. “So I did my best to leave a developed, but open canvas for collaborators…including an image search for collage pioneer Georges Braque, some torn bits of brown paper I work with in studio and painting on actual wood panel.”

Next the image went to Upstate New York where Steven Specht was the second person to work on the image. Specht considers himself “to be part of the great collage consisting of the collective collagist community” and is a frequent collaborator with other collage artists. “I am always aware of the role of perceived depth in creating an interesting composition,” wrote Specht. “I try to infer a vague, surreal narrative into my works.”

Newcastle, Ontario collage artist Amanda Fasken, who is new to collaboration, took a subtle approach. “My approach was to add a little bit of myself and my work onto the layers, but make it seem apart of the piece without taking anything away from the other artists work,” she writes. She added the element of the woman standing in the top right corner.

Los Angeles-based Danielle Garza blazed a path of colour by adding a waterfall of images along the right side of the piece. Michael Waraksa from Chicago sprinkled the work with airplanes and eyeballs and other elements. Lita Kenyon from Edmonds, Washington added an image that “would be a contrast of shape and colour” and played with opacity and filters to make it work.

The final contributor was Brooklyn, New York’s Allan Bealy who brought the piece together. “Because I was the last to add to the piece there was already a substantial image built. I needed to find a way to bridge the elements into what would be the finished piece,” writes Bealy. “I took the bridge metaphor literally and used bridge and span graphics as my contribution. I also decided to play around with Braque as he seemed to be the focus of the work but was receding into the background after everything was added.”

Because the work started and finished as an homage to Georges Braque, Ric Kadour titled the piece, Dear George, Thanks For Everything. It was Braque, after all, who helped make contemporary collage possible. In 1909, Braque was engaged in an intense study of Cézanne’s ideas about painting. Working side-by-side with Pablo Picasso, he worked to make art, “art”, or in the words of art critic Ernst Gombrich, “to stamp out ambiguity and to enforce one reading of the picture—that of a man-made construction, a coloured canvas.” He did this by fragmenting his subject. “When objects shattered into fragments appeared in my painting about 1909; this for me was a way of getting closest to the object,” said Braque. “Fragmentation helped me to establish space and movement in space.”