Issue One Editorial by Benoit Depelteau 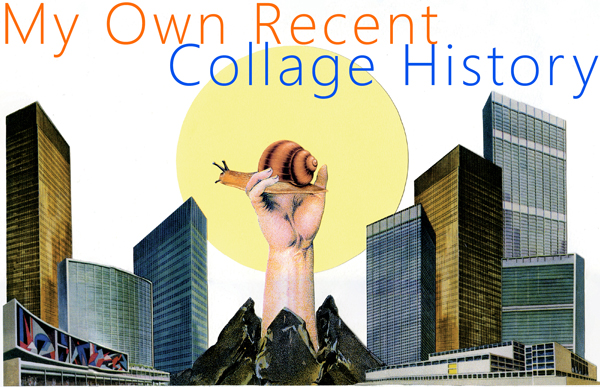 My Own Recent Collage History by Benoit Depelteau

We first discussed the idea of a project involving collage in June 2011. In front of a coffee on a warm and sunny day, I explained to Ric Kasini Kadour, co-owner of Maison Kasini, Kolaj‘s publisher, that it might be the right time to provide a new platform for contemporary collage. He agreed.

In the last ten years, the internet has shone a new light on art. From image-sharing websites to blogs, artists have been able to reach an audience and, in some cases, transform this visibility into revenue. By allowing the viewer to have instant access to a multiplicity of artists from everywhere in the world, the web changed the consumption of art.

In this process, few other art forms have seen their practice and visibility grow faster than collage. Fairly quickly, it seemed that everybody was making collage. It is plausible that many more artists than we actually thought were already cutting and pasting, but only as a secondary practice. When collage work started to sprawl across the virtual world, groups and networks formed naturally, giving collagists an energetic and vivid community.

The next step was in the air for some time. After having experienced a few online collaborative projects, some artists often discussed how to transpose that energy into the real world. By taking advantage of the ability to send small collages in the mail, artists initiated exhibition projects, this time in the physical world, but usually outside established art venues. A few of them were noticed, published in magazines and invited to exhibit their work. And then some others. The visibility began to grow and more galleries realized collage’s potential.

In 2012, Collage is 100 years old. Over this period, it has been put forward at precise moments such as in surrealism or punk art, but something more important is happening right now. For the first time, collage is emerging as a whole, invading the entire spectrum of styles present in contemporary art.

We live in a time characterized by the omnipotence of images. They reach the world simply by the push of a button. We have access to an impressive amount of fragments, usually in a mercantile perspective. Somehow, looking at all these fractions rarely makes a meaningful whole. So let’s change this! Let’s use these archetypes to build something new, let’s express ideas with these images, let’s get this collage started!