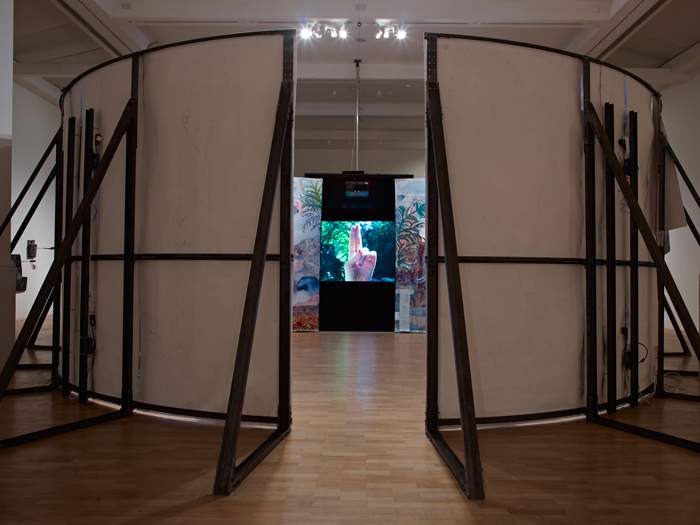 Laure Prouvost, the recipient of the fourth Max Mara Art Prize for Women, and nominated for the Turner Prize 2013, presents Farfromwords: car mirrors eat raspberries when swimming through the sun, to swallow sweet smells at the Maramotti Collection. Previously exhibited in London at the Whitechapel Gallery (20 March – 7 April 2013), the work has been purchased for Maramotti’s permanent collection.

Laure Prouvost’s new work is a large circular room in which a variety of media (photographs, collage, video clips, graffiti) enter into dialog with one another.

The perimeter of the canvas, which constitutes the environment’s walls, is covered with Surrealist images. The work’s organization is polycentric, consisting of objects, faces, bodies, and landscapes, which are punctuated by eight video screens showing excerpts from the film Swallow (which is presented in its entirety in a darkened space at the rear of the room). The inspiration for the work is in the aesthetics and sensual pleasures the artist experienced in Italy. It is a highly personal interpretation of the Italian Grand Tour, experienced through objects and people encountered during Prouvost’s residency.

The work is accompanied by a diaristic book, rich with images and written notations, and includes an interview with the artist by Bina von Stauffenberg, as well as contributions from Daniel F. Herrmann (curator of the Whitechapel Gallery) and Melissa Gronlund (editor of Afterall).

The biennial Max Mara Art Prize for Women supports and promotes the work of artists who reside in the United Kingdom by offering its recipients the opportunity to explore their potential by way of the production of new art works during a six-month residency in Italy. The jury for this fourth edition of the prize was chaired by Iwona Blazwick and further consisted of Lisa Milroy, artist; Muriel Salem, collector; Amanda Wilkinson, gallerist; and Gilda Williams, writer and art critic.