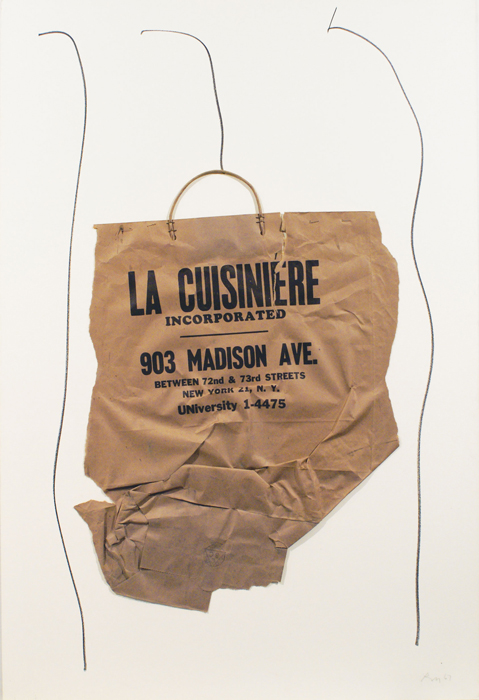 Bernard Jacobson Gallery in London presents a comprehensive survey of collage work by American artist Robert Motherwell (1915-1991). This exhibition runs concurrently with “Robert Motherwell: The Early Collages” from the Peggy Guggenheim Collection, which is at the Venice Biennale.

Robert Motherwell was introduced to collage in 1943, when he, Jackson Pollock, and William Baziotes were approached by Peggy Guggenheim to produce work for the first exhibition of collage at Guggenheim’s Art of the Century Gallery in New York. Pollock and Baziotes soon abandoned the form, but Motherwell discovered a passion and aptitude for the medium which spurred him to continue with it throughout his career. As he says, “I felt a magical release. I took to it, as they say, as a duck to water.”

Motherwell’s major collage innovation is the torn paper edge, a technique that reflected his love of working with paper, and his commitment to automatism. Further, he worked on a much larger scale than his European counterparts had attempted, and Americanized the medium to reflect his views that “in Europe…people take it much more for granted that certain things are for certain people. But in America, people believe everything is for everyone, including abstract art.” To this end, Motherwell believed collage to be “a necessary invention”, in which “one has the whole world and human history as subject matter, juxtaposition inconceivable before modern times.”

The exhibition at Bernard Jacobson Gallery presents over thirty works from the 1950s up until 1991, the year of his death. In his 1960s collages, Motherwell incorporated “everyday” fragments, echoing Schwitters’ merz technique developed 40 years earlier. Collages such as Bowes & Bowes, Cambridge (1966), which includes a torn mailing wrapper from the Cambridge booksellers, and La Cuisinière (1967), featuring a shopping bag from a Madison Avenue kitchen supply store, are examples of this.

In the 1970s and 80s, Motherwell developed entire series of collages. The collage elements in these later works were often cut andtorn fragments of proofs of his own prints that he embellished with gestural brushstrokes and painted compositions, and are demonstrative of his work with the torn edge. This technique of incorporating print fragments occurs in works such as French Revolution Bicentennial No. 5 (1987), Irish Book (1989), and the haunting Night Dream (1988).

← You Can’t Follow Just One:
Cory W. Peeke tells us about collage on Tumblr
Book Review: The Collage Workbook
by Randel Plowman →