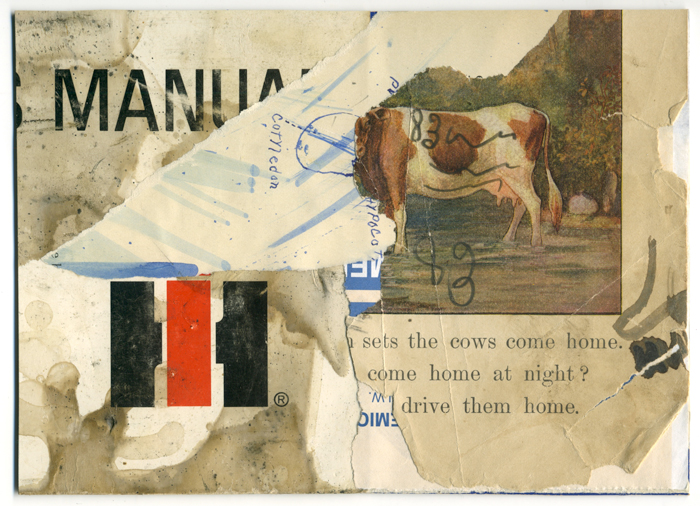 Kolaj Magazine contributor Cory W. Peeke examines the phenomenon of Tumblr and its place in the world of collage in Issue Four.

I must confess right off that I am totally obsessed with Tumblr, the free blog hosting platform which currently hosts over 91 million blogs. For those who are unfamiliar with Tumblr, it is a social network for bloggers who wish to post text, music, video and, especially, images. As Tumblr’s motto exclaims, it allows you to “follow the world’s creators.”

There are Tumblr blogs for every taste and persuasion. There are music blogs, collection blogs, poetry blogs, museum blogs, and on and on, but given its particular format, Tumblr seems especially suited for the presentation of visual art. And indeed there are thousands of blogs on Tumblr that focus on all forms of art. It is these visual arts blogs and their array of imagery to which I’ve become addicted. More specifically, I’m a devoted follower of many of the Tumblr bloggers who dedicate their blog to promoting the work of artists working in collage.

The more of these blogs I followed and the more new art and artists I was introduced to the more I wanted to know something about the people behind the posts, the curators of the content. Who are these folks? Why do they do it? Are they collage artists, aficionados of the medium or both? I was curious as to what motivated them to dedicate so much of their time to sourcing and posting images.

I decided to reach out to a number of bloggers whose posts I follow and ask if they would give me some insight. I primarily chose to contact people who blogged mostly, if not exclusively, collage and who promoted an array of artists not just themselves. There are a number of bloggers out there, including myself, who promote almost exclusively their own work. While I follow many of these fantastic artists, people like Fred Free, Zach Collins, and Flore Kunst; I was more interested to find out what motivated the folks who promote the work of others. I eventually found several bloggers who agreed to answer my questions. Their blogs have as an eclectic an array of names as they do stylistic variety in the imagery they disseminate. 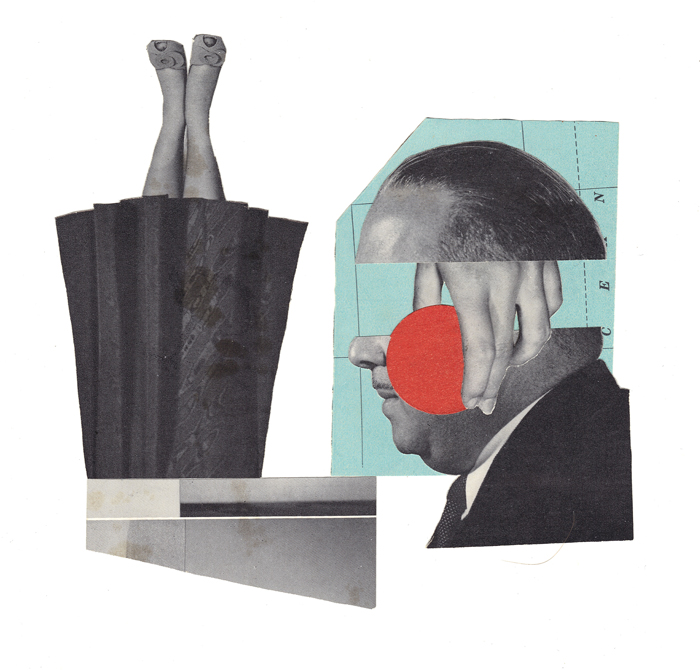 James Edward Callahan runs a blog with the wonderfully offensive title My Asshole Confounds the Louvre. Callahan is a 20-year-old college student majoring in art history who resides in central Florida. He himself is a collagist and at times posts his own work on the blog, but more often than not he is bringing viewers’ attention to the work of other collage makers. Callahan who expresses an affinity for old books and magazines, vintage paper and traditional cut and paste collage, also states that collage “seems to be on a more personal level than other media.” This sentiment is certainly one with which I identify. The tactile intimacy of the artist engaged with his idiosyncratic collection of material makes for works of art that are both highly personal for the artist and connect with the viewer.

Naomi Weekes, a 22-year-old studying at Goucher College, who curates the blog collagemecrazy.tumblr.com, has a similar affinity for the personal touch of collage. She refers to herself as a “traditionalist” who still uses a film camera and prefers to handwrite a letter rather than send a quick email. Weekes recognizes we live in a society that “doesn’t honor and appreciate art as much as it used to.” So she sees her blog as a way to encourage her followers to incorporate art into their everyday lives and hopes to motivate them to create their own collages. Weekes, like the others discussed here, brings work that might normally be seen by very few people to an audience of literally thousands.

The creators of theelectricbeef.com, Joseph Kendrick and St. Francis Elevator Ride, hate for good work to go unnoticed. The 28 and 30-year-old artists who run this wonderfully designed and visually enticing blog go out of their way to connect with artists (not just collage artists), promote their images and, unlike many blogs, provide context for the work. The Electric Beef goes beyond just being a blog that reblogs images to one that provides a platform for artists to promote both their images as well as the thinking behind them. As Kendrick says, “On Tumblr, you have an active community of invested individuals wanting to share what they’ve done to inspire others.” And the The Electric Beef is one of the most active members of that community posting, almost daily, works by a rich collection of challenging and inspiring artists. [Editor’s note: The Electric Beef closed as of 31 May 2013. The site remains up, but no more new posts will be made.]

45-year-old Wellington, New Zealand artist and illustrator Peter Campbell (collageoftheweek.tumblr.com) is not only interested in promoting contemporary collage, his own and others, but he hopes to introduce others to “the rich history and diversity of collage” by posting images of rarely seen collage work from the earlier part of the 20th century as well as the work of artists from a wide variety of countries. Like the guys at The Electric Beef, Campbell hopes that his posts will encourage followers to take a closer look at the artists and their larger body of work.

Polish artist/designer Estera Lazowska (Feru-Leru.tumblr.com) and Mike Hunter, who runs brainpaste.tumblr.com, both use their blogs as much for their own inspiration as for that of their followers. Hunter sees it as a way to “build a ‘collection’ of interesting pieces” and Lazowska started hers as a way to collect and organize the images that inspire her.

Many artists find Tumblr an excellent way to introduce their work to a broader audience. Spanish artist Martin Copertari, who has been posting on Tumblr only since January 2012, finds the platform an outstanding way to make contact with other artists and those who appreciate collage. Copertari currently has 200 followers and has “observed that my artwork has caught the attention of a wide range of people” and helped his work “become more visible, particularly abroad.” 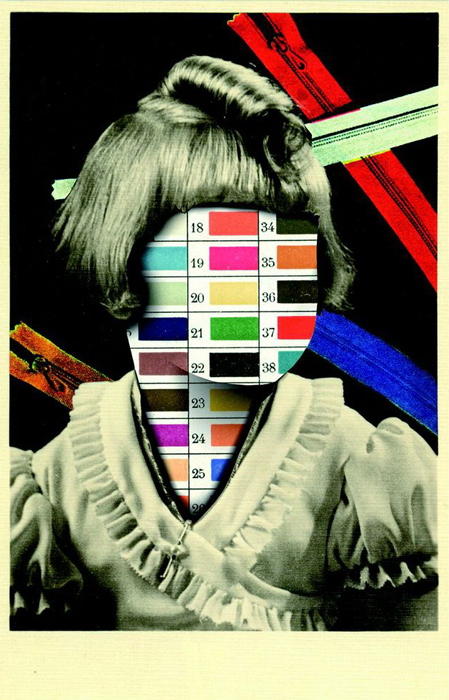 Zach Collins, a Minnesota-based collage artist, feels the same. Since he began posting on Tumblr over twenty months ago he has garnered a whopping 1800 followers and seen “a huge effect on” his “visibility/career.” Lyon, France-based artist/illustrator Flore Kunst has also seen a boost to her career. Both her international visibility and roster of illustration clients has increased since she began blogging. 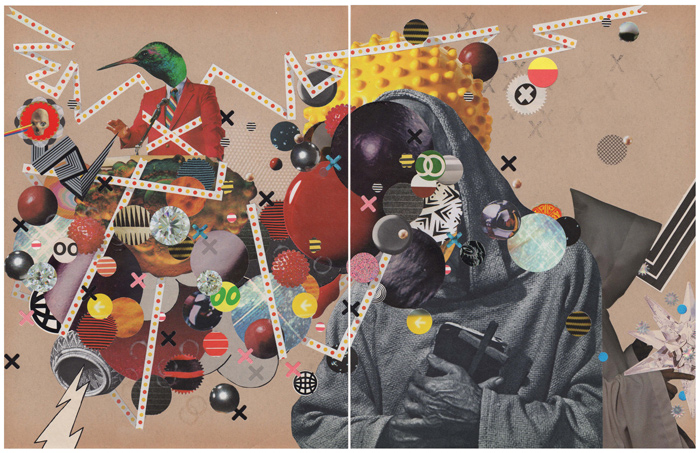 California artist Justin Angelos is unsure about any career boost he’s received, but has noticed increased traffic to his website and other social media since he began posting about six months ago. Angelos sees Tumblr as “the perfect world for collage” where there are few rules, creative experimentation is valued, and you get “tons of eyes to see your work.” Collins, a sometimes collaborator with Angelos, has seen “a progressing interest in collage.” With the work of these bloggers, the Tumblr platform, and the huge variety of collage artists beginning to explore social media for the promotion of their work that interest is sure to grow.

It is encouraging to see just how many Tumblr bloggers go out of their way to bring more attention to the art of collage and the wide array of forms the medium can take. I personally thank them for introducing me to hundreds of new artists whose work I would most likely never have discovered without them. If you’ve never explored Tumblr, I’d encourage you to check out the blogs discussed above as well as the many others featuring collage (a selection of which is listed below), but be forewarned, if you are an image fanatic like me, it can quickly become an obsession.

This article appeared in Issue Four. SUBSCRIBE to never miss an issue.

Flying Through the Dogwoods
by St. Francis Elevator Ride
24″x48″
digital collage
2010
Courtesy of the artist

Colored Freak
by Flore Kunst
collage
2012
Courtesy of the artist