Somewhere Between Here and There 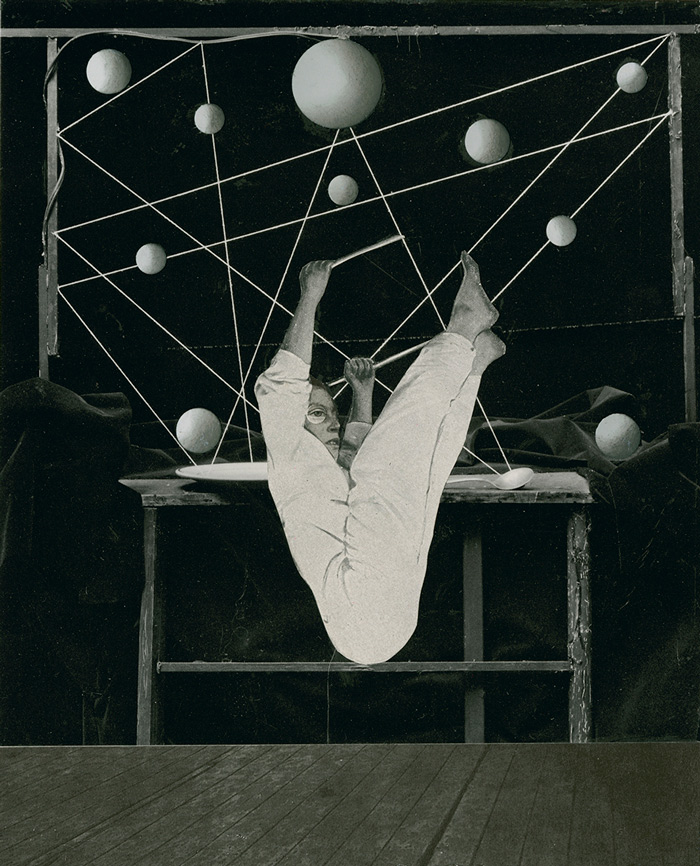 “Somewhere Between Here and There”: Vanessa Woods
at Jack Fischer Gallery in San Francisco
13 January-24 February 2018

Vanessa Woods’ solo exhibition, “Somewhere Between Here and There” presents a new body of work created from the archive of 1940s-60s paper ephemera and objects that Woods recently inherited from her deceased collage mentor/photographer Ken Graves. Part elegy, part eulogy, the collages in “Somewhere Between Here and There” engage in a seductive illusion. Each collage reveals a subject navigating a set comprised of layers that can be pulled up or pulled apart to reveal other realms. The varying perspectives of space and scale function like a magician’s sleight of hand, continually reorienting the viewer and further accentuating references to artifice, theater and illusion.

“My relationship to collage is essentially a questioning about the world and my own experiences,” Woods says of the current series. “The ongoing creation of this work is both an homage to my mentor, and a way to memorialize Ken’s work. It implicates his continued presence in my life and I feel like we are collaborating between worlds, space and time,” says Woods.

The collages in “Somewhere Between Here and There” generate psychological spaces that invoke the borderlands of dreams and the shadow worlds inhabited by those we mourn. The tension between tangible and ephemeral, concrete and abstract, is given weight by the presence of protagonists in the collages, who often stand at thresholds between worlds. Rituals of mourning are also a reoccurring motif, specifically the Jewish tradition of leaving a pebble on the gravestone as a memento to the deceased’s life. Throughout the work, stones populate the landscapes, or sets, floating mid-air, being pulled by subjects or resting singularly on surfaces. Finally, many of the collages incorporate the use of clouds, waves and rippled sand as a means to trace past activity—atmospheric, geological, cultural, personal—and change wrought by time.

With a vast inherited archive at its origin, the works in “Somewhere Between Here and There” navigate the places between memory and history; the known, and the lost; and the legacy of artist bonds formed across generations. A selection of over twenty collages made by Woods’ between 2016-2017, as well as original collages by Ken Graves, courtesy of Anglim Gilbert Gallery, will be on display for the exhibition.