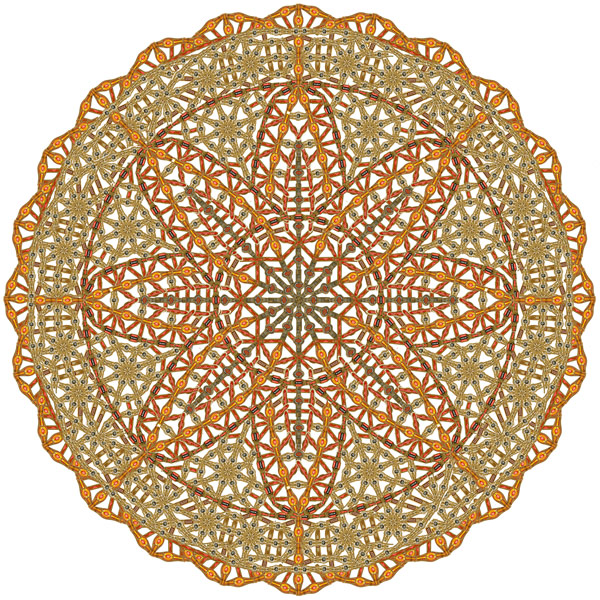 “The Shape of Relics” by Troy Dugas

The intricate, large-scale cut paper assemblages in “The Shape of Relics” are created from unused product labels that artist Troy Dugas collects. The shredded or cut source material is meticulously arranged to create compositions that appear woven. The purpose of the original label is obscured through the use of repetition, pattern, symmetry, precision and scale. New meaning is created by the reinterpretation of colour, shape and line.

This exhibition also features a new series of portraits loosely based on Egyptian and Roman mummy depictions and online arrest reports. Working from imagination and reference, the artist attempts to create a kind of abstraction, unique stylization and synthesis. Similar to Picasso’s portraits influenced by African masks and the portrait of Madame Matisse, The Green Stripe, Dugas creates something continuous yet new. Influenced by ancient art, his subjects are flattened and covered in invented pattern reflecting a state of vulnerability, acceptance and sexuality.

Troy Dugas is a native of Louisiana. He received his Bachelor of Fine Arts from the University of Louisiana in Lafayette and his Master of Fine Art from the Pratt Institute in New York. His work is in several collections including the Ogden Museum of Southern Art in New Orleans, Louisiana and the Frederick R. Weisman Art Foundation in Los Angeles, California. He has been featured in numerous publications including Open Studios Press’ juried publication New American Paintings, the inaugural issue of Studio Visit Magazine (also a juried publication), the New Orleans Art Review, and David Rubin’s book Psychedelic: Optical and Visionary Art since the 1960s. In 2012, Dugas was included in the Oxford American Magazine article “The New Superstars of Southern Art”. He has received numerous accolades including a fellowship from the Louisiana Division of the Arts and the 2009-2010 Pollock-Krasner Grant.