Variations on Self at Nisa Touchon Fine Art 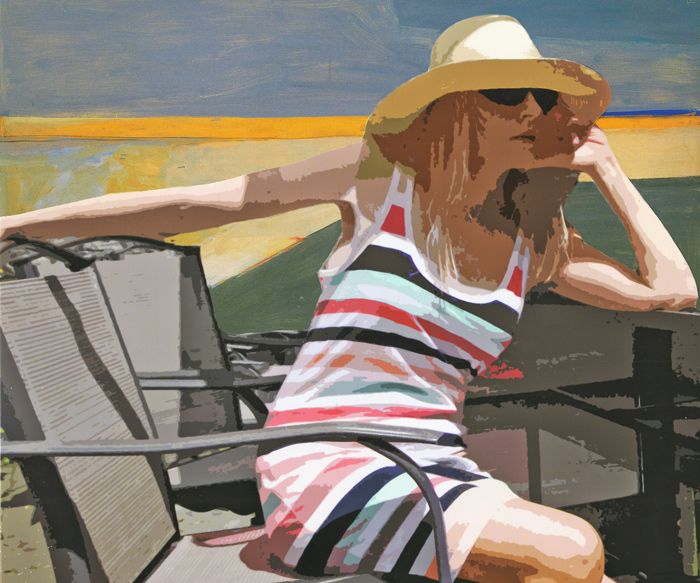 “Variations on Self” presents Ginnie Gardiner’s exploratory process of collage making, that culminates in oil paintings on canvas, through an extensive group of small self portrait collage studies and a few of the resultant paintings. The exhibition provides the collector with a rich body of works that chronicles Gardiner’s process and her leisurely conversation with artists such as Henri Matisse and Richard Diebenkorn who, both known as painters, were also collagists.

Gardiner takes photographic self-portraits posing with herself not so much as Ginnie Gardiner but as the classic “seated woman” as explored also by Henri Matisse and Richard Diebenkorn and then does a process of digital posterization to the image, converting the photograph to an abstracted and flattened surface in order to achieve a painting-like effect so that the cut out and collaged figure is able to coexist with her chosen backgrounds, which resemble and even borrow directly from such sources as Diebenkorn’s “Ocean Park” series. Gardiner says, “Planar compositions that explore figure/ground issues and reductive palettes has been my primary area of focus for the last 5 years.”

Ginnie Gardiner is a mid-career New York artist who has shown in numerous galleries and museums nationally and internationally for 30 years. She graduated from Cornell University with a Bachelor of Fine Arts in 1974.

There is a full colour catalog available for this exhibition.