In the Studio is an online-only feature of Kolaj Magazine where we peek inside the studios of collage artists. If you are interested in being featured, visit the In the Studio Call to Artists page. 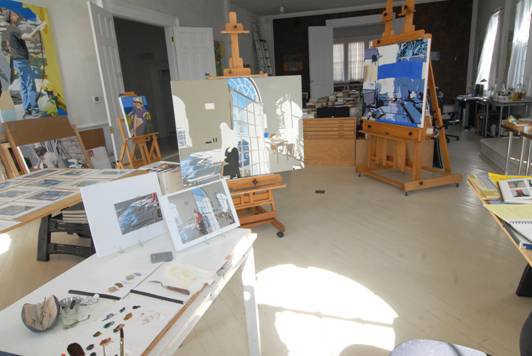 Ginnie Gardiner is a mid-career New York artist who has shown in numerous solo and group exhibits for 30 years. Gardiner graduated from Cornell University with a Bachelor of Fine Arts in 1974. In 2005, she moved upstate to Catskill, New York, where she and her husband renovated and restored the former Lyceum, a Federal-era building located in this historic village. 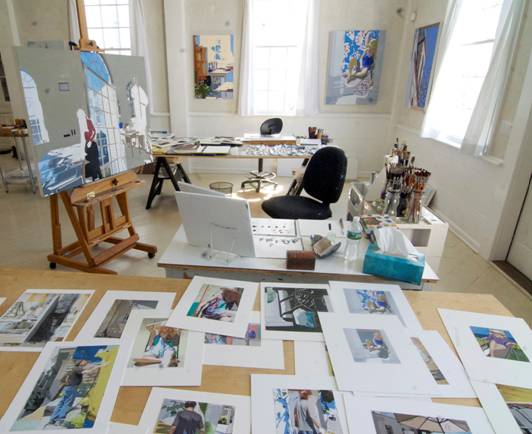 “I work to achieve a synthesis of my photographs of the figure and my photographs of the architectural and landscape elements drawn from the interior and exterior of my home and studio in upstate New York, an early 1800s Federal building. I create collages of my surroundings by working the figures into the architectural elements, creating planes that will read as flat colour shapes in my oil paintings.” 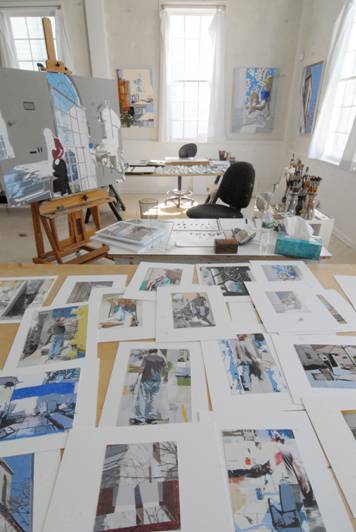 “My subject matter currently is the integration of the figure into the local landscape. Since moving upstate from New York City in 2005, my subjects are derived from my immediate surroundings, whereas in my earlier work in the 1980s and 1990s, I built collage studies from historical sources combined with contemporary figures pulled from magazines and my own photographs of dancers.” 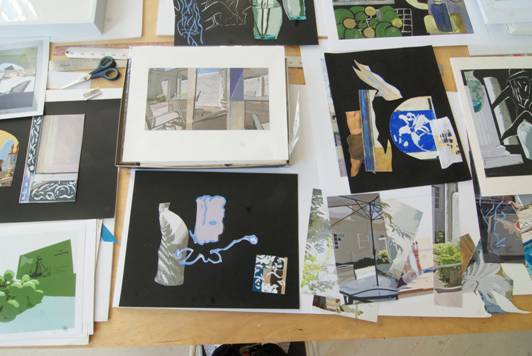 Cecil Touchon of the International Museum of Collage, Assemblage and Construction, writes about Gardiner’s collage, “Collage is often thought of as a medium of disjunction and the shock of unrelated forms clashing against each other. But collage can also be about the careful fitting together of unrelated parts to add up to a new cohesive unity. Gardiner’s collages fall into the latter category where the forms and colour systems she employs are governed by a painter’s eye that looks for resonant relationships. This is evidenced by the compositions’ linear structures where the edges of one form moves along a certain trajectory that connects to the linear movement of adjoining forms and at the same time creates the containment of negative spaces that teeter on becoming positives.” 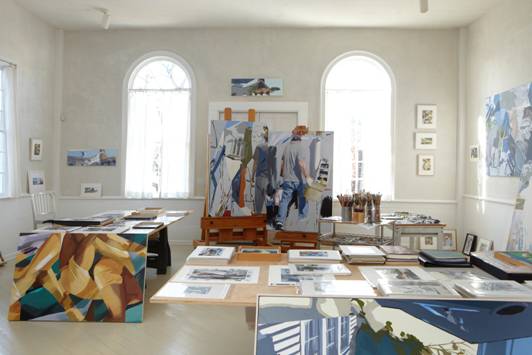 To learn more about Ginnie Gardiner, visit her Kolaj Magazine Artist Directory page and her website.

In the Studio is an online-only feature of Kolaj Magazine where we peek inside the studios of collage artists. If you are interested in being featured, visit the In the Studio Call to Artists page.